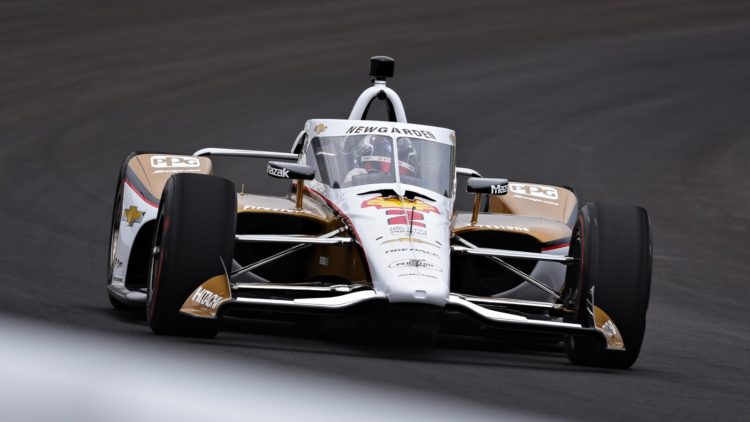 Newgarden showed off his new livery by logging the fastest lap of the afternoon. Photo: IndyCar

The final day of IndyCar’s open test for the Indianapolis 500 was completed on Thursday, and it was Josef Newgarden that ended the day on the top of the timesheets.

Early morning rain and pervasive cloudy and humid conditions led to a long delay in running for the second and final day of the open test.

The sun finally broke out after noon, and the first installation laps took place over four hours after the initially scheduled start time.

Newgarden was the first driver to truly sample the conditions and put in a fast lap around the 2.5-mile oval, and he was soon joined by the rest of the 31 drivers that took part in the test.

It may have been the two-time champion that logged the fastest lap of 229.519 MPH at the end of the day, but the entire stable from Chip Ganassi Racing were strong all day.  All five drivers looked comfortable and hovered near the top of the charts for the better part of the afternoon.

Marcus Ericsson ran the most laps of all, completing nearly an entire race distance with 148 laps in the books.

Unlike Wednesday, there were no accidents to pause the action once conditions allowed.  The track stayed under green flag conditions for the entirety of the four-hour window bar a couple short stoppages for a track inspection.

The only driver confirmed for this year’s 500 to not take part in today’s running was Helio Castroneves, who crashed his car yesterday and forced his team to choose a thorough rebuild rather than rushing to get back on track.

The test allowed for plenty of talk up and down the paddock about which team would be able to field another car in order to bring the entry list up to the limit of 33 cars.

Nobody has yet committed to taking the final spot, and it seems likely that the entry will be run as a joint effort if and when it is announced.

Now that the test from Indianapolis is complete, the drivers will get out of the superspeedway mindset and head to Alabama for next weekend’s race around Barber Motorsports Park.