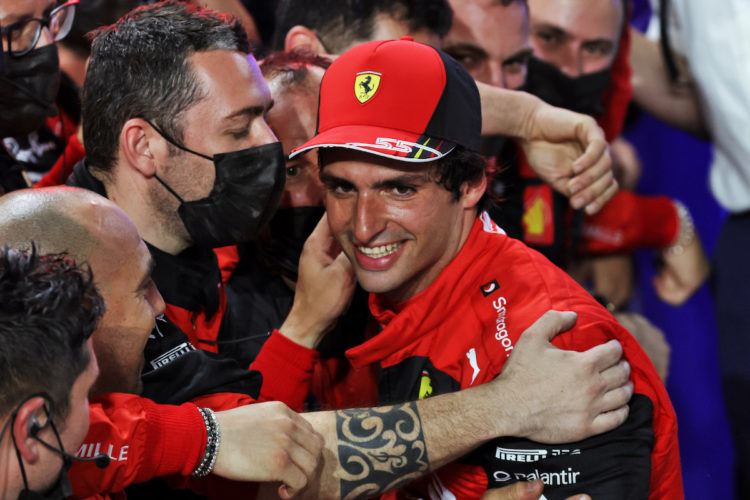 Ferrari is remaining “super cautious” over its title chances for the 2022 Formula 1 season due to its lack of championship success over the last decade, according to Carlos Sainz.

After the opening three rounds of the campaign, Ferrari leads the Constructors’ Championship with a 39 points lead over Mercedes.

It also leads the Drivers’ standings, with Charles Leclerc scoring 71 out of a possible 78 points to start the new season.

However, Ferrari has not won a title since 2008, when it triumphed in the Constructors’ fight.

It battled for the championships in 2017 and 2018, however its efforts fell away in the second half of both season, with Mercedes and Lewis Hamilton taking the spoils.

Although Ferrari has started the 2022 season strongly, Sainz says its title drought is leaving it cautious for the upcoming campaign.

“We’re confident we can develop our car,” Sainz said. “We already have obviously pieces running in the wind tunnel, and a car in a wind tunnel that is better than the one that we have right now on track – like all the teams have.

“But we keep saying that Red Bull and Mercedes are the favourites, because we haven’t been in a title fight in the last few years.

“In the previous years, these teams have out-developed Ferrari, so we are still super cautious.

“We know we have a great car and we have put together on track a great car – but these two teams have been in the title fight for the last two or three years, they know how much you need to improve, they know exactly what they need to do.

‘And we maybe, are lacking that bit of experience. I think we have great people, and we are prepared – but we don’t know. So, we are still cautious and are expecting a bit to see what happens.”