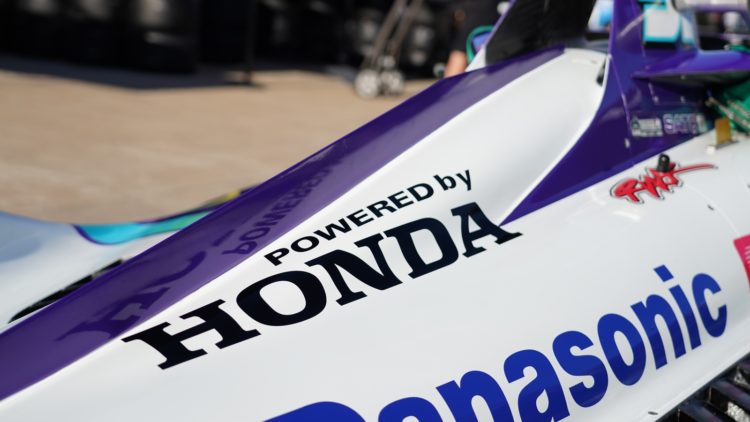 Honda and Chevrolet were busy running tests on their new engines at IMS. Photo: Kevin Dejewski

IndyCar’s new 2.4-liter engines were run on track for the first time on Monday, with both Chevrolet and Honda putting in laps around the Indianapolis Motor Speedway road course.

Two of the series’ most experienced veterans were tasked with shaking down the new power units, and Josef Newgarden and Scott Dixon each got to sample their respective manufacturer’s new engines.

Before this session, the only on-track testing that had been done was with current cars fitted with ballast to simulate the added weight that will be a consequence of the new package.

As it is, this test was only evaluating the combustion engine and associated cooling systems, as the battery hybrid portion of the new engine is not yet available and was not tested.

“This is an important step for HPD, Honda, and IndyCar as the series moves into the electrified era, and it was a successful day,” said David Salters, HPD president and technical director who is on hand for the test.

“But there are many more steps to take before the full, hybrid power unit debuts in 2024.  The all-new 2.4-liter E85 bio-fueled engine has been designed, simulated, developed, dyno-tested, manufactured and assembled by the inspiring Honda men and women at HPD in California.

“We set ourselves these challenges to develop our people and technology here at HPD.  We are very proud of the amazing team at HPD and our Honda “challenging spirit”.  There is still a very, very long list of things to be accomplished before the power unit is tested in competition, but this is certainly a major milestone for everyone at Honda Performance Development”

The weather in Indianapolis was brisk for late March, and running was delayed until the afternoon when the sun had warmed the track to suitable temperatures.

Even after the two champion drivers were released out on track, the cool temperatures likely led to some scenarios not being carried out in full.

There are two more days of testing planned, and the weather is expected to warm up a bit over that time before a weather system arrives Wednesday afternoon, meaning that morning’s running may prove to be the most representative to actual race conditions.

As there is an active development race between the two engine manufacturers, very little information about the test day was provided including any images of the new power plants.

The introduction of the new engines was recently delayed to the 2024 season on account of ongoing supply chain and development issues.