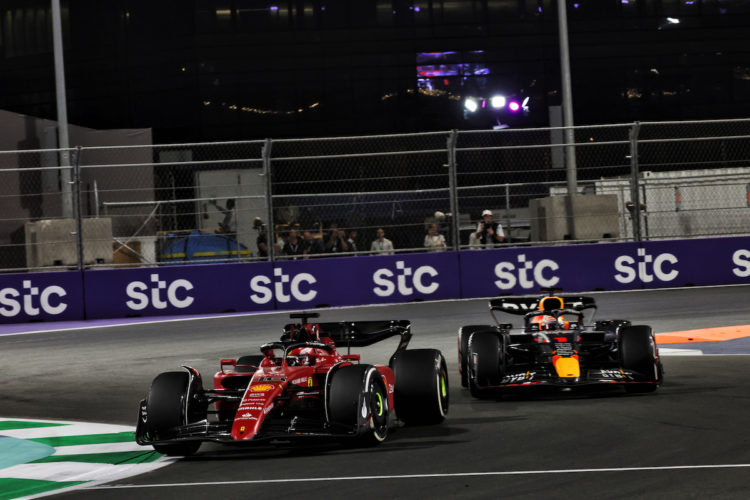 Max Verstappen says that it “wasn’t easy” to use tricks during the Saudi Arabian Grand Prix to overtake Ferrari’s Charles Leclerc.

A handful of laps from the end of the race, Verstappen moved ahead of Leclerc and went on to open his winning account in 2022.

Verstappen and Leclerc battled for several laps and at one stage, both drivers slowed down before the final corner in order to get DRS for the following straight.

It continued the trend of racing that was seen in Bahrain, with DRS proving to be powerful and allowing a driver who had just been overtaken to move back ahead.

“It was really tough, but a good race,” Verstappen said. “We were battling hard at the front and we just tried to play the long game.

“They were quick through corners, we were quick on the straights. The tyres were wearing out quite quick around here.

“You could see at the end I had a little bit of more pace, so just tried to get by.

“It wasn’t easy playing smart tricks in the last corner but eventually I managed to get ahead.

“But then even after that he was constantly in the DRS and then with the yellow flags in the last lap, just knowing how much you should lift, whether it’s allowed or not, it was tough.”

Verstappen says that although the 2022 cars that have been constructed under a new set of technical regulations allow for closer racing, he explained that it makes planning an overtake much more difficult than before.

“Yeah, it seems like once you get quite close, when you get within half a second, you actually can have a good exit,” Verstappen said.

“And I think that makes it a lot more tricky to actually do the pass, let’s say in the last corner compared to last year, so it’s a lot harder to plan your pass.”