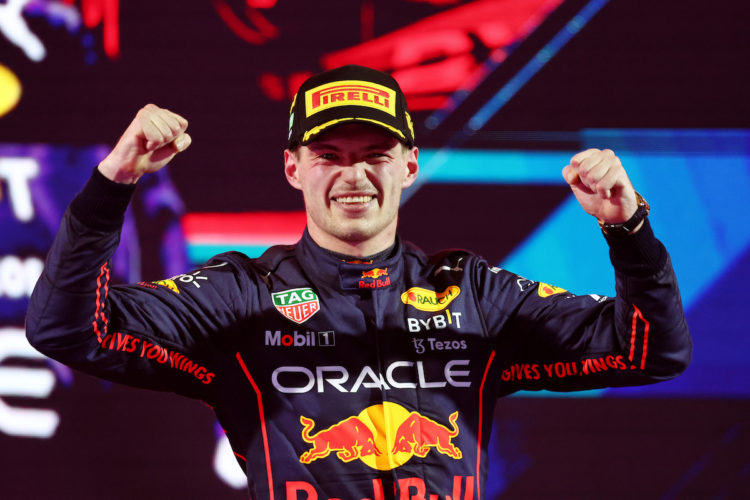 The duo fought for the final handful of laps, with the reigning World Champion crossing the line just half a second ahead of Leclerc.

Leclerc found himself leading the race after a Safety Car dropped pole-sitter Sergio Perez into fourth place following the Red Bull driver’s one and only pit stop.

Leclerc headed the field for the majority of the race, however a late Virtual Safety Car allowed Verstappen to close behind the Monegasque driver.

A battle ensued for several laps, akin to their fight in Bahrain last weekend – however on this occasion, Verstappen made his move stick on lap 47 for the win.

Carlos Sainz in third made it a double podium for Ferrari, while Perez missed out on a podium for the energy drink squad in fourth.

Hamilton recovers to score one point

Lewis Hamilton endured a difficult weekend in Jeddah, dropping out of qualifying in Q1 on Saturday and starting the grand prix from 16th.

In the early stages of the race, he moved forward and into the top ten, equipped with a set of Hard tyres that took him deep into the race.

However, a late VSC also came with a closed pit lane, and Hamilton was unable to serve his mandatory pit stop to switch to the Medium compound.

When he did make his stop, he dropped back outside the points but had fresh tyres compared to his rivals around him, passing a handful of cars to cross the line in ninth behind Pierre Gasly and Kevin Magnussen.

Scoring stronger points up front was Hamilton’s team-mate George Russell, who endured a lonely race to finish fifth in front of Esteban Ocon and Lando Norris.

Only 18 cars took the start in Saudi Arabia, with Mick Schumacher ruled out after his crash on Saturday and Yuki Tsunoda suffering from an issue prior to the race start.

Nicholas Latifi caused a Safety Car on lap 16 when he crashed at the final corner, however he would be one of many retirements before the chequered flag.

In quick sequence, Fernando Alonso, Daniel Ricciardo and Valtteri Bottas suffered issues that saw all three park up their cars.

Alexander Albon also failed to make it to the end, as he tangled with Aston Martin’s Lance Stroll in the dying stages of the race.