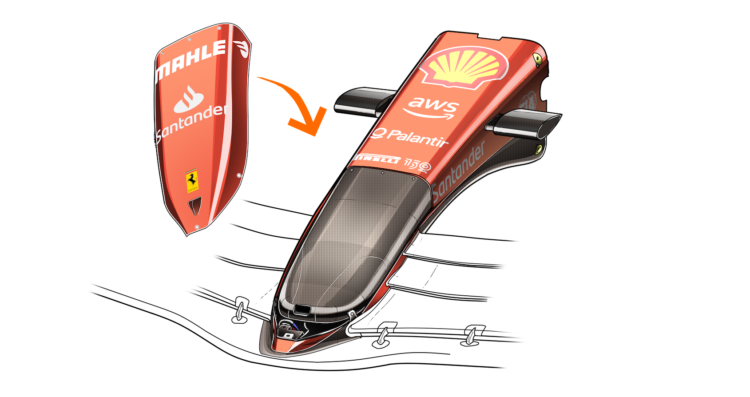 With the first race weekend in Bahrain and the subsequent Saudi Arabian GP, ​​we have finally been able to see the true strengths of the 2022 Formula 1 cars.

Some teams proved their pre-season testing form wasn’t simply ‘glory runs’, whilst others arrived in Bahrain with a car that looked nothing like the one that hit the track in Barcelona, both in terms of appearance and performance.

Ferrari back on top!

A Ferrari back on top and a Mercedes in trouble was the first definitive verdict that we were able to ascertain. The Italian team had never hidden the good feelings they had about the 2022 project since last year. Ferrari, after the flop of 2020 and the frozen single-seaters in 2021, has staked everything on this year.

After Bahrain, many praised the Power Unit designed in Maranello, also thanks to the excellent results obtained by customer teams Alfa Romeo and Haas, both sensationally in the top ten. On the other-hand, Mercedes-powered cars have fallen back, with Aston Martin, Williams and McLaren firmly at the back.

Ferrari’s return to the top of F1 is not exclusively attributable to the discovery of a top Power Unit, but also to work on the interpretation of the regulations that is giving the hoped-for advantages. The aerodynamics of the F1-75, with its uniquely high sidepods, are not the only element on which Ferrari have come up with unique solutions.

Mattia Binotto has openly stated that most of the design choices made on the F1-75 are not definitive and without the possibility of correction, but the engineers have reserved the possibility of being able to change some aerodynamic philosophies if they prove to be less advantageous.

An example of this aspect is the nose, which we have seen to be like an arrowhead – the only car to have this solution – and with the cone that rests on all four profiles of the front wing. In reality, the impact structure found inside the nose shell is shorter and only touches three of the four wing profiles.

It’s a smart choice that could open up other development options for Ferrari, by allowing them to shorten the nose if they want to opt for a solution similar to what Red Bull and McLaren are running, with a nose that stops before the main plane and that leaves the gap between the wing elements free in front of the central area.

The F1-75 seems to have obtained an advantage over its competitors not only with the engine and aerodynamics, but also for having solved as soon as possible the problem of aerodynamic rebound – widely known as porpoising – which causes the floor to stall continuously at medium to high speeds. The average loss of time per lap as a result of this phenomenon costs on average about 0.7 seconds, and forces the teams to intervene by stiffening the suspension, and increasing the height of the car.

During the last few days of testing Ferrari worked hard on the floor, introducing a more complex specification in the design very similar to that of McLaren, to try to reduce porpoising. The openings reduce the amount of air under flowing through the underfloor venturi tunnels, but at the same time hits a balance of not having too much of a negative impact on downforce when cornering, where you need to get the most out of the ground effect.

The absolute favourite during the winter tests was Red Bull. And it looked as though they would come away from Bahrain with a hefty points haul, albeit less than Ferrari, however in a major upset, they left with nothing after both Max Verstappen and Sergio Perez retired with issues.

The RB18 car has undoubtedly shown that it can fight for the world championship, showing under certain conditions that it can be more competitive than the Ferrari of Charles Leclerc and Carlos Sainz. Ferrari proved slightly better in making the tyres last, and above all is more reliable.

Red Bull brought several aerodynamic packages to Jeddah, which they tested in Friday’s free practice on Verstappen and Perez’s cars to try to find the right set-up. A trend that we have already seen last year, where often the two standard bearers of the Milton Keynes team have used different aerodynamic configurations. In Arabia the two pilots used different rear wings, with the Mexican using a lower load rear wing.

The incredible speed delta on the straight that we saw when Verstappen attacked Leclerc several times into Turn 1 was down to a combination of DRS, but also the need for Leclerc to recharge his battery. Red Bull, from what emerges from the paddock, suffers from a considerably overweight RB18, estimated at almost 18kg over the minimum weight of 798kg.

The Bahrain retirements of both Verstappen and Perez were due to problems with the draft of the petrol, and not problems with the hybrid. Red Bull explained that it was a problem with the fuel pumps, presumably the high pressure one (a standard component) that vaporises the fuel causing the draft problems. However, what was also strongly suspected is that at Red Bull they had to start with a minimum quantity of fuel for the Bahrain to save weight, which would go some way in explaining why both drivers had the same problem in the race at more or less in the same phase.

Mercedes’ in 2022 is one of the worst starts to the season ever for the team since the era of hybrid engines in F1. After years of success, the Brackley team seems to have started with a serious performance handicap. Hamilton’s third place in Bahrain is more thanks to the driver than the car, and a fistful of luck thanks to the retirements of Verstappen and Perez.

In Bahrain the Constructors’ Champions would have suffered a heavy gap to Ferrari and Red Bull had it not been for the late Safety Car that brought the group back together at the end of the race.

In Bahrain it certainly wasn’t shining of silver for Mercedes, even the technical innovations introduced for the race did not work. The new floor tested by both Lewis Hamilton and George Russell during Sakhir’s Friday practice was eventually discarded as it did not bring the expected results. The Brackley team had to work on the ground clearance to reduce porpoising and this negatively affected the set-up of the W13.

In Jeddah the situation was not very different, as there was little time to solve the problems. There is talk of the Spanish GP as a target to have an updated W13, but some technical innovations to solve the porpoising could already arrive in Australia. In Arabia the only novelty was the rear wing, much less loaded on the DRS profile and used in two versions.