Verstappen berates Netflix for making Norris ‘look like a dick’ 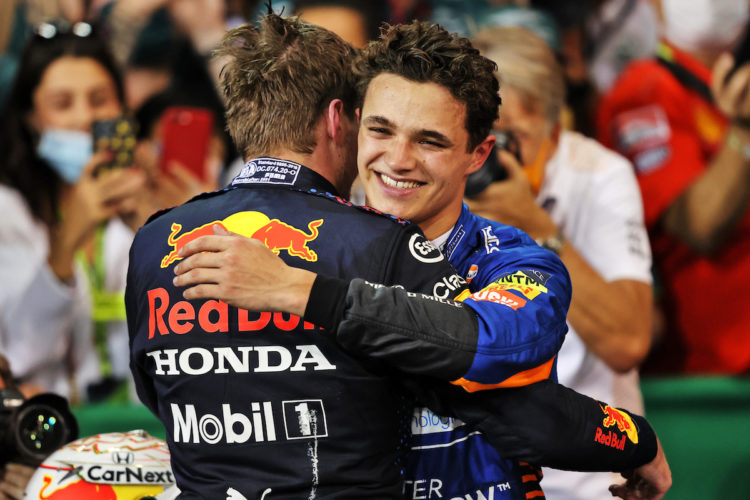 Red Bull’s Max Verstappen has hit out at Netflix’s Formula 1 ‘Drive to Survive’ docu-series for making Lando Norris “look like a dick”.

The fourth season of the show was released prior to the start of the 2022 F1 season earlier this month.

Verstappen has spoken previously over his unwillingness to participate, and asserted in Saudi Arabia that his stance has not changed.

“I’m sure we’ll talk about it with Stefano [Domenicali, F1 CEO] but at the moment I’m not really interested to take part in it,” Verstappen said.

“It’s also just taking more time, when we are already doing so many things. I saw the benefit initially of course to get more popularity.

“But I think now it’s reached a stage where it’s a bit more like keeping up with the Formula 1 world, if you know my reference.

“It shouldn’t be like that. It’s better just to make a season review, by F1 itself, I think that’s way nicer to look at. But that’s my opinion, I just don’t like to be a part of it.”

Verstappen says that he tuned into some episodes of the latest season, and was surprised to see how “nice guy” Norris was portrayed.

“I watched a few episodes of the last one and I was surprised I suddenly found myself talking in it,” he said.

“It’s probably stuff from 2018 or something they picked up and used again about fighting and what I like to do.

“That of course was not correct, I could already hear my voice was a bit different. A lot of times I was saying stuff and they had the beam (mic) around so I have to be a bit more careful with that.

“It’s just not my thing. Then of course they try to pick moments throughout the season and fabricate it in a way.

“For me, personally, what I didn’t like was about Lando and Daniel. I think they are two great guys, really nice first of all, and they made it look like Lando was a bit of a dick, which he isn’t at all.

“Again, I know Lando and I think many people know Lando. He’s a funny guy, a great guy, he has a great character and when you look at that episode you think ‘who is this guy? What is going on?’

“And I think when you are new to the sport and you’ve never seen a Formula 1 car in general, they do like him and why should that be, because he is a great guy.

“You just immediately get a wrong picture of a person and that’s exactly what I think about me in the beginning.

“I’m someone who when you ruin it from the start, you don’t fix it. That’s it, you’ve ruined it. So that’s my stance and that’s how I’ll go forward.”