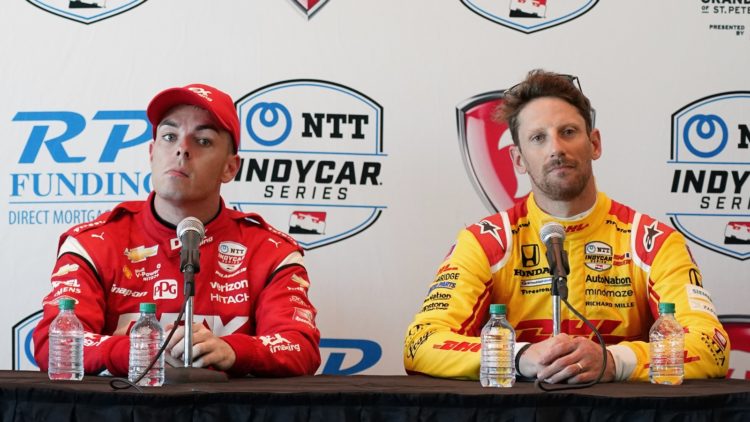 Both drivers agree that the alternate timing line can cause problems. Photo: Kevin Dejewski

Romain Grosjean and Scott McLaughlin have both stated their displeasure for IndyCar’s use of the alternate Start/Finish line after it caused issues in Saturday’s practice session.

IndyCar employs a unique system to help speed up qualifying sessions in which it designates an alternate timing line on some road courses shortly before the entrance to pit road.

This is done so that drivers can complete a timed lap then immediately dive into the pits, rather than circulating for an entire cool down lap before coming down pit lane.

The system works well most of the time, but there are situations where the alternate timing line is placed in awkward positions that cause unintended side effects.

During Saturday morning practice on the streets of St. Petersburg, drivers were trying to do mock qualifying runs before the timed session later in the day.  Multiple drivers slowed before the alternate timing line in order to give themselves space on the track to attempt a proper full speed lap.

This meant that there were a half dozen cars driving very slowly at the end of the back straight just as Grosjean was approaching at full tilt, unaware of how slow the group was going.

The Frenchman was unable to slow down in time and ran into the back of Takuma Sato, sending him up into the air with a substantial impact to the rear of his Dale Coyne Racing Honda.

Grosjean was more critical of the fact that the marshals did not wave any flags to warn him of the traffic around the blind corner, but the situation itself was the result of the location of the alternate timing line.

“Well, there was just no flags on the track, and I think we should have flags when these cars are that slow to [take the] corner,” said Grosjean.  “I just think if I had known there were like four cars — because you cannot see.

“I know there was one on the left, one on the right. That’s all I knew. I didn’t know there were some in front. If there’s only one, the guy should accelerate.

“Obviously there were more, but I think just a white flag to tell us that, and I just think you shouldn’t be driving that slow on the racing line, that’s all.”

McLaughlin, who was participating in the same press conference, jumped in to express his displeasure with the system as a whole even though he was unaffected by the traffic jam.

“Sorry, but I think that the alternate start-finish line, I probably don’t agree with it,” said the eventual race winner.  “I think it should just be the start-finish line.  I said that before; it happened at Portland a couple times, and I caught Romain in a peculiar spot.

“I feel like coming around a blind corner, everyone is trying to get a lap started.  That’s the only point we can really start our lap to get a good run.  It does choke up there and it’s just — you don’t see.

“Unless we get a flag, you don’t see.  I’m probably a big fan of probably moving the line depending on what track we go to.  That’s just my personal opinion.”

There were no penalties or warnings given for slow driving during Saturday’s practice session, and there are not standing rules in place to forbid driving slowly to gain a gap ahead of a timed lap attempt.

Alternate Start/Finish lines have been used in IndyCar for many years, and the location of the line in St. Petersburg has not been changed for over five years.