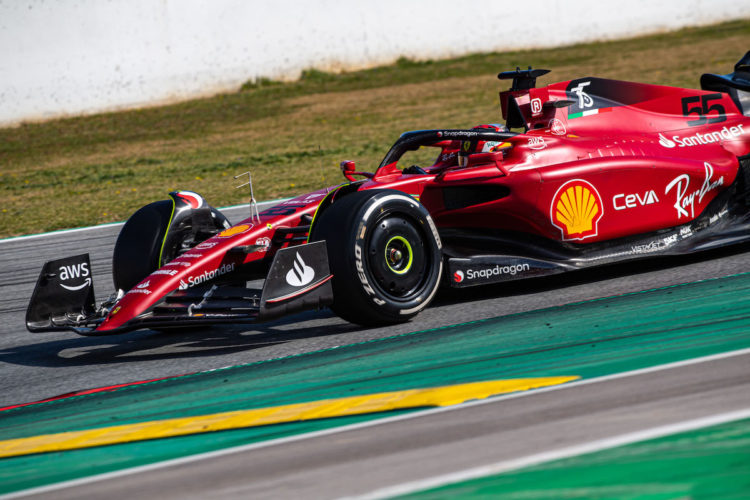 Ferrari’s Carlos Sainz says he is confident that rival Formula 1 cars will be easier to follow through corners during the upcoming season.

The sport is operating under a new set of technical regulations this year, with one of the aims being to allow for closer racing on the track.

In recent years, the increase in downforce and aerodynamic complexity has led to the production of more dirty air, meaning a car behind a fellow challenger will lose downforce.

It has made wheel-to-wheel racing increasingly more difficult, as drivers are also often forced to sit back to manage temperatures if they struggle to overtake.

During the pre-season shakedown runs in Barcelona, Sainz was spotted following fellow cars through corners, and says he noticed a sizeable difference compared to 2021.

“I did that on purpose obviously I can tell you I already felt some differences,” the Ferrari driver said.

“It is pretty obvious already. And I’m relatively positive about it. [I’m] optimistic that it’s going in the right direction.”

Sainz completed 144 laps during the opening two days of testing, as he prepares for his second campaign as a Ferrari driver.

With the season getting underway in just under a months’ time, the Spaniard is prepared to provide more feedback to Ferrari to aid the development of the F1-75, as he had limited input last year due to the team’s car being largely carried over from 2020.

“For me, [2022 is] one of my favourite seasons in Formula 1, just because of the challenge that it presents and how much input a driver can have in the development and the feedback of the car in order to guide the team,” Sainz said.

“I arrived [at] Ferrari with a car that was pretty much already developed.

“And this year is a brand new start for me and I feel like it’s a good chance to develop it and to give my feedback on it.”