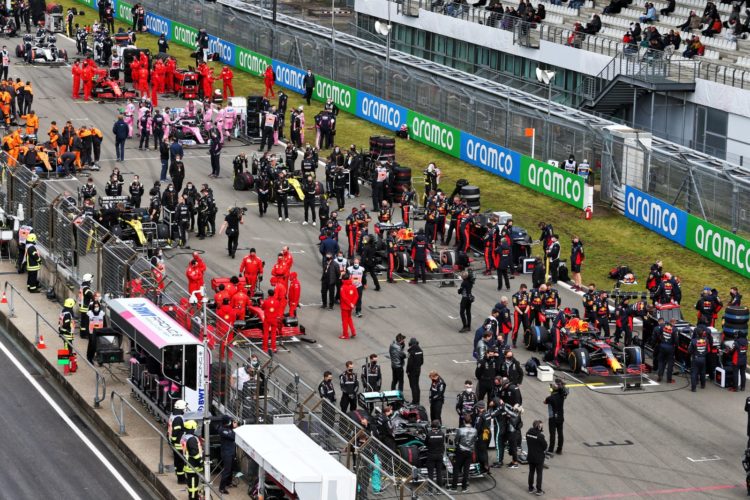 The grid before the start of the race. Eifel Grand Prix, Sunday 11th October 2020. Nurbugring, Germany.

It was recently reported that Andretti Autosport had submitted a letter to the FIA to join the Formula 1 grid as a new entrant, following a failed bid to purchase the current Alfa Romeo outfit.

For a new team to join the grid, it must be able to prove it has the necessary funds to do so, which includes a $200 million entry fee, which is distributed amongst the teams as a way of compensating them against any loss of income by having an extra team on the grid.

However this “anti-dilution” fee isn’t the only hurdle according to Mercedes F1 chief Toto Wolff, who reckons any new entrant would need “more like a billion” to join the grid and be competitive as well as proving they bring value and aren’t simply just another team.

“Andretti is a name, that’s for sure,” Wolff said. “And the American market is important. But every team that is joining needs to add value.

“It’s not only by paying a $200 million entry fee, but it needs to demonstrate in my opinion what it can do for the other teams, for F1 and FIA. Only then the sport will grow.

“We are the absolute pinnacle, this is the Champions League or the NFL, and redistributing franchises is not the goal, that’s not how it should be, and it’s not the intention of F1 and the FIA neither.

“But if there is a real brand coming in with good people, necessary funding, not only the 200 million [entry fee] but probably you need more like a billion [dollars] if you want to play in this club straight from the get go, then why not?”

Like Wolff, Red Bull’s Christian Horner recognised that Andretti is a name steeped in motorsport history and potentially worthy of a place on the grid.

“I think it’s great that there’s the interest for people wanting to enter F1,” he added.

“The Andretti name is certainly a powerful name in motorsport. And, of course, they’re not the only ones that are making noises about coming in.”