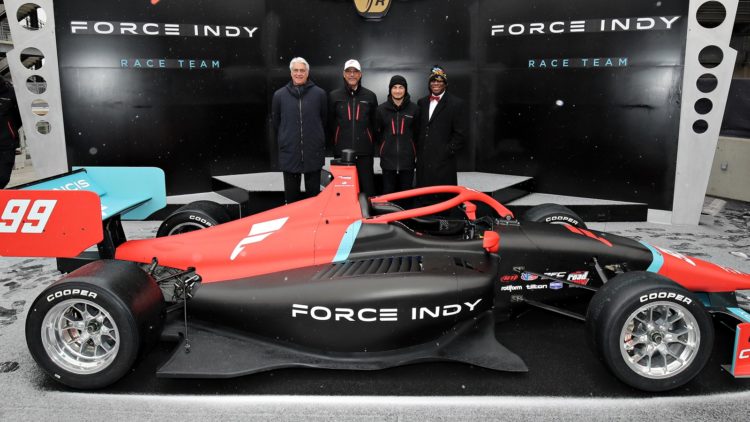 Force Indy, an African American led team with backing from IndyCar owner Roger Penske, will be contesting the Indy Lights series this season, a step up from the USF2000 campaign the team ran in its maiden year.

The team is run with a focus on hiring men and women of color in all areas, including mechanics, engineers, staffers, and drivers.

Ernie Francis Jr. is set to drive the team’s car in the 2022 season, with the Florida-native stepping into the Road to Indy from the very successful stint in the Trans Am Series and a single season driving in the Formula Regional Americas Championship.

“This is an incredible opportunity,” Francis said. “After getting a taste last year and beginning to learn what open-wheel racing is all about, I found myself wanting more.

“This is probably one of the biggest steps that I have taken in my career. This is just an incredible opportunity for me.  If you told me a year ago I’d be racing in the Indy Lights Series, I never would have believed you.

“To know that I’ll continue my education with Force Indy and only one step away from the NTT IndyCar Series makes this unbelievably special. I cannot wait to get started.”

Francis Jr. first learned of interest in his driving services when he received a phone call from Penske himself, who discussed the program with him and made him the offer.

Force Indy will continue to have backing from the broader Penske team, and will also have technical partnerships with at least one established Indy Lights team.

Team principal Rod Reid will continue to lead the team as it grows and learns, and is proud to be a driving force in IndyCar’s Race for Equality & Change initiative.

“Being able to finish our first season with a win showed what this team is capable of doing,” Reid said. “I could not be more thrilled to promote our group to the Indy Lights Presented by Cooper Tires championship with Ernie Francis Jr. His work ethic and history of success speak for itself.

“It’s so important to us to continue this journey that we started about a year ago.  My goal and the goal of the team is to really develop talent that’s from the community, black and brown communities. That’s something that we’ve done from the very beginning, trying to bridge that.”

The team’s previous driver Myles Rowe will be running another season in USF2000 while the team advances to the next level of the Road to Indy program.

Francis Jr. and the entire Force Indy team will compete in Indy Lights for the first time on the streets of St. Petersburg in late February, sharing a racing weekend with the NTT IndyCar Series.