Honda revels in title after recovery from ‘rock bottom’ 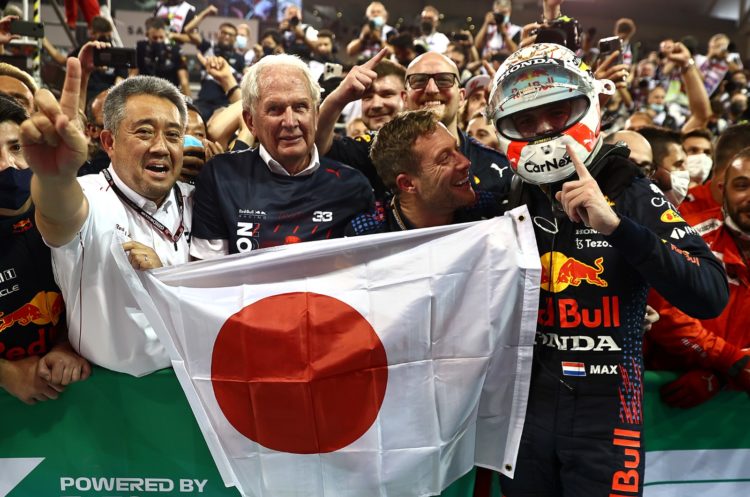 Honda says Max Verstappen’s world title acts as a reward for its tenacity after “hitting rock bottom” during the early days of its return to Formula 1.

Honda struggled during its partnership with McLaren but, after switching to Toro Rosso in 2018, emerged as a front-runner upon aligning with Red Bull in 2019.

While Red Bull missed out on the Constructors’ Championship Verstappen claimed the Drivers’ title with a last-lap move on Lewis Hamilton in Abu Dhabi.

Verstappen consequently became the first driver since Ayrton Senna in 1991 to win a title in a Honda-powered car.

“We came back into the sport in 2015 as a PU supplier, attracted by this very sophisticated hybrid PU technology,” said Honda’s Formula 1 Managing Director Masashi Yamamoto.

“Compared to our rivals, our development time was relatively short and partly because of that, we struggled a lot in the beginning and we hit rock bottom in the early days.

“However, even while having to deal with logistical difficulties partly down to the Covid-19 pandemic, in this our last season we have been fighting with very strong rivals and we came out on top of the Formula 1 world.

“This is due to all the hard work from all our engineers and mechanics, not just those at the race track.

“They never gave up even in the most difficult times and made numerous technological breakthroughs along the way.

“We were able to prove the validity and effectiveness of our technology and the abilities of our workforce.”

Yamamoto also paid tribute to the work undertaken in conjunction with McLaren despite the often fraught nature of the relationship.

“Of course, we could not have achieved these results without the major role played by our great partners, Red Bull Racing with whom we won the title and also Scuderia AlphaTauri who welcomed us with an open mind, allowing us to move forward together after a difficult three years,” he said.

“We should not forget McLaren, with whom this era started back in 2015 and all the drivers who have worked with us, always putting maximum effort into achieving the best possible results.

“Without all these elements working together and without the passion of each individual involved, we would not be where we are today.”