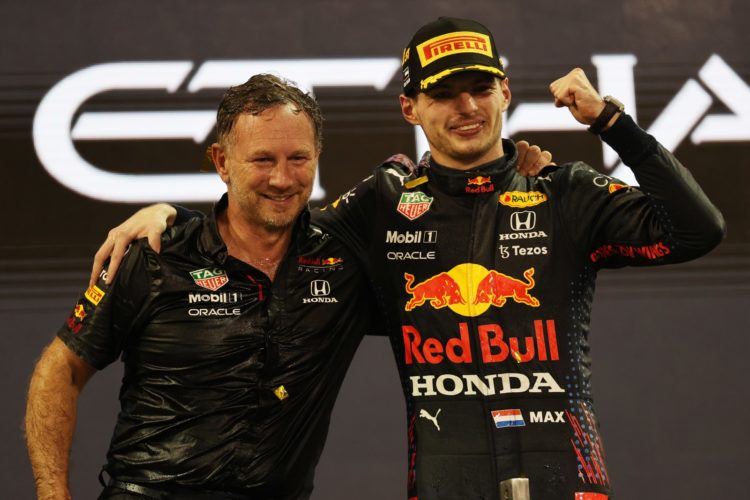 Max Verstappen says he wants to stay with Red Bull Racing for the rest of his career after clinching his maiden Formula 1 title during a dramatic Abu Dhabi Grand Prix.

Verstappen passed title rival Lewis Hamilton for the lead on the last of 58 laps at Yas Marina to grab the victory, and with it clinch the championship.

The result remains provisional owing to Mercedes lodging two protests, one against Verstappen, and one against the procedure prior to the restart.

But Verstappen, speaking in the immediate aftermath of the race, tried to soak up the emotion.

“It’s unbelievable,” said Verstappen. “I tried the whole race, I kept fighting and then of course that opportunity in the last lap. It’s incredible.

“I am still having a cramp… It’s insane. I don’t know what to say. These guys here, my team and of course Honda as well, they deserve it.

“I love them so much and I really, really enjoy working them already since 2016 but this year has been incredible.

“I think they know I love them and I hope we can do this for 10, 15 years together. There’s no reason to change, ever. I want to stay with them for the rest of my life. I hope they let me. It’s insane.”

Verstappen also heaped praise on team-mate Sergio Perez, for his role in the race, in which he defended for a lap against Hamilton, costing the Mercedes driver several seconds.

“Finally a bit of luck for me,” he said. “Insane. I also want to say a big thank you to Checo, he was driving his heart out today, it was great teamwork and he’s an amazing team-mate.”