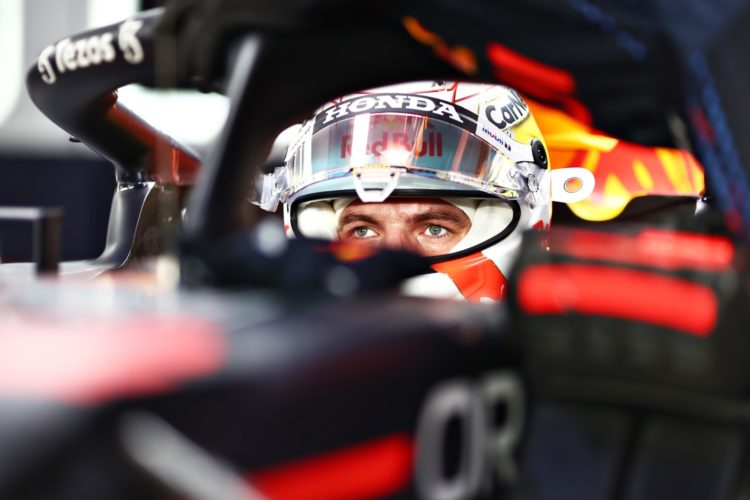 DOHA, QATAR - NOVEMBER 21: Max Verstappen of Netherlands and Red Bull Racing prepares to drive in the garage before the F1 Grand Prix of Qatar at Losail International Circuit on November 21, 2021 in Doha, Qatar. (Photo by Mark Thompson/Getty Images) // Getty Images / Red Bull Content Pool // SI202111210479 // Usage for editorial use only //

Max Verstappen is performing better than ever and is showing no sign of pressure amid the ongoing Formula 1 title fight, according to his team boss Christian Horner.

Verstappen heads to this weekend’s Saudi Arabian Grand Prix atop the championship standings by eight points and has finished first or second at each of the last six races.

He has an outside chance of sealing the title at the Jeddah Corniche Circuit if he outscores rival Lewis Hamilton by 18 or more points.

“Make no mistake, fighting for your first F1 title is an intense moment in your racing career, but the maturity Max has shown throughout the campaign has been extremely impressive,” Horner wrote in his Red Bull Racing column.

“He’s relaxed and dealing with the pressure incredibly well, I think he is driving better than ever.

“A good example of this was during the race in Qatar, when he did not feel we could catch Lewis, but commented over the that radio he “wanted to have some fun”.

“Max is plain-speaking and he calls it how he sees it. He doesn’t work with a sports psychologist; it is just how he copes with it.”

The upcoming penultimate round of the campaign will take place at the wall-lined Jeddah circuit, which has never before been used for racing, and Horner is expecting an intense weekend.

“We head to Saudi Arabia for their first race where the track looks insane from I’ve seen,” he said.

“It’s hugely fast and the first sector is like Suzuka, but with walls! It is going to be a massive challenge and I’m sure there will be plenty of excitement and drama.

“On paper, it looks like a power-sensitive circuit, so you’d say that tends to favour Mercedes and it looks as though they feel that way too, but you just don’t know.”