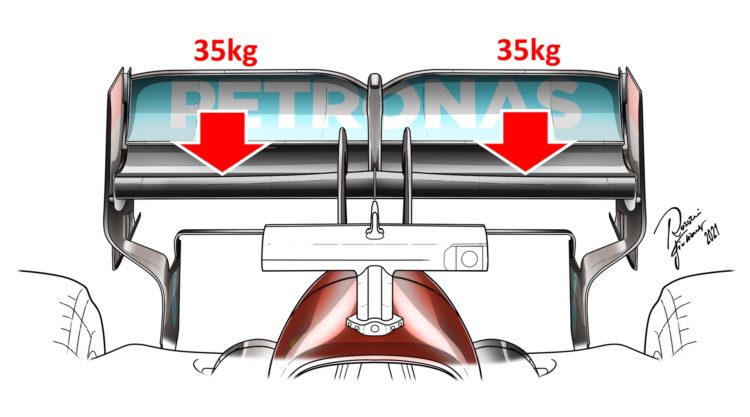 Mercedes’ fortunes look to have changed in these final races, with the team dominating two out of three races during the November triple-header, in which Lewis Hamilton reopened the world championship after a painful Mexican GP for the team.

Mercedes look to have changed gears after the race at the Hermanos Rodriguez circuit, with a showing in Qatar, and especially in Brazil, that was reminiscent of its pre-2021 dominance.

On a technical level, there have been no major updates on the W12, nor on other cars. In this final phase of this very long 2021 championship, all the teams are now focused on the design and development of the 2022 car, in which all will start from a blank sheet.

Beyond Mexico, a circuit that clearly favoured the RB16B, Brazil and Qatar have suited Mercedes, which showed unbeatable performance unlike recent races before, so how do you explain this leap forward by the Brackley team?

The Mercedes v Red Bull duel has always been very balanced across the season with the championship swinging in both directions from race-to-race. It has always been difficult this year to get a prediction on who would perform better at certain venues, precisely because of the balance of strength between the W12 and the RB16B.

However, in Brazil the W12 seems to have made an important leap forward, which would not seem to be attributable only to circuits more favorable to the W12.

First of all, it must be considered that the progress of this W12 starts from afar, that is, from the British GP. Mercedes forced development at the beginning of the summer, after having understood the problems that gripped the W12 in the first phase of the season. Brackley’s aerodynamics for their ‘home’ race had brought very important aerodynamic innovations throughout the central area, greatly changing the layout of the bargeboards and the floor.

The Mercedes W12 suffered more than the Red Bull from the narrowing imposed on the floor, due to the low-angle rake set-up. The balance was affected, with a very unstable W12 at the rear. The side edge of the wavy floor that characterised the Mercedes at the beginning of 2021, disappeared at Silverstone. The new floor had a more rectilinear shape and a series of vortex generators designed to better manage the air flow in the back.

The real progress in terms of aerodynamic balance is therefore to be attributed to the innovations introduced at Silverstone, and from then on Mercedes has always remained at a level similar to Red Bull.

Returning to their Mexico dip, where Max Verstappen was in a league of his own, we know that Mercedes suffers more on rear limited tracks than Red Bull, and struggles with the low speed corners and in managing the tyres. After the setback in Mexico City, Toto Wolff’s team decided to implement a more aggressive strategy for Brazil, mounting the fifth ICE on Lewis Hamilton’s car.

On the Power Unit front, it has decided to be more aggressive in the mapping to be used in qualifying and the race, even at the expense of a lower reliability “safety range”. With the abolition of the “Party Mode”, from Monza 2020 the endothermic mapping to be used in qualifying and the race must be unique, with no possibility of going lower or higher with power. The teams therefore opt for engine strategies that are a compromise between reliability and horsepower. In the last few races, Mercedes has decided to implement more powerful mappings in the Power Unit, and it has been seen how the mileage of the thermal engines has decreased, with Bottas even reaching unit number six. The latter had to retire in Qatar due to problems related to the overheating of the engine.

The Mercedes Power Unit is characterised by the use of a very miniaturised turbine-compressor unit, which was assumed to be highly stressed with a lower air density in Mexico, at over 2,000 meters above sea level. Although Sao Paulo is also at a high altitude, it’s 800m elevation is nothing in comparison to Mexico City.

The fresh endothermic component used on Hamilton’s car at Interlagos was a smart choice, as the additional power was clearly seen against Red Bull as he recovered from 20th to first.

Mercedes decided to go even higher with the mappings in Brazil, gaining almost 20hp over the old unit. The differences in performance with team-mate Bottas, who raced with an older unit in Brazil, was evident in qualifying and in the race. Compared to Verstappen’s Red Bull, the gap opened by Hamilton in Brazil was truly impressive (over four-tenths of a second), especially in qualifying on a very short track where you lap just over one minute.

Mercedes made the difference not in top speed, but in acceleration. The choice of the new ICE at maximum speed is very rewarding at circuits where you run with a high incidence in the wings, where more resistance is generated. Mexico, Brazil and Qatar were raced with the highest incidence, with the exception of Red Bull at Interlagos.

The performances seen in Losail, Qatar, were more levelled than a week before, and the gap with Red Bull was certainly not that of Brazil. The excessive power in the straights of the Mercedes was no longer seen, but in the corners the W12 managed to gain the lead over the RB16B. Mercedes returned to the unit they used before in Brazil, and the speeds recorded by the W12 were not sensational.

The real difference in Losail is that it’s full of medium-high speed corners that go well with the car of Hamilton and Bottas. The Qatar track is the classic front-limited, where the tyres most under stress are those of the front axle. Mercedes made the difference in the central sector, in the fast corners 6-7-8, while Red Bull was unable to use the lower set-up due to problems with the DRS actuator.

The speeds recorded by Mercedes sparked protests from rival Red Bull team, which Christian Horner openly declared that they had some suspicions about the regularity of the rear wing of the W12. Milton Keynes’s team is fighting a psychological as well as technical war with Wolff’s team, and there has been no lack of controversy after Hamilton’s exclusion in Brazil due to the irregularity of the DRS.

Red Bull protests initially focused on the rear suspension of the W12 after the Turkish GP, while later the focus shifted entirely to the flexibility of the rear wing. Red Bull claims to keep an eye on the Mercedes wing from Hungary, disputing the fact that the main profile is folding backwards at high speed. Adrian Newey showed the FIA ​​some photos framing the rear part of the main profile, in which there are some scratches from rubbing with the support of the endplate, which would testify to the rearward movement.

This bending would make the rear wing non-compliant with article 3.6.3, which imposes a maximum gap between the airfoils with closed DRS of 15 mm.

The backward movement of the main profile would distance the profiles beyond the maximum 15mm allowed by the regulations when the car travels at speeds over 200km/h. This would produce drag reduction benefits and explain, according to Red Bull, the speed anomalies detected by the Milton Keynes team.

However, the rear wing of the W12 appears to be in order when the car is stationary during the scrutineering, apart from that small hitch in Brazil. In that case, however, the problem concerned the exceeding of the maximum gap of 85mm with the DRS open, due to excessive play in the fixings of the mobile flap.

To accommodate Red Bull, we learned that the FIA ​​has carried out a new stress test on the main plane of the W12, applying a pair of weights of 35kg on both sides. Already at the French GP the FIA ​​had tightened the flexure checks of the rear wings, forcing many teams to reinforce the load-bearing structures of the wing group. The Mercedes wing would have remained in compliance with the regulations at Losail, however, and did not resolve the doubts and uncertainties of Horner and Newey. We will see if for the last two races the FIA ​​will implement new flexibility tests at scrutineering in the last two races, or if everything will be postponed to 2022.