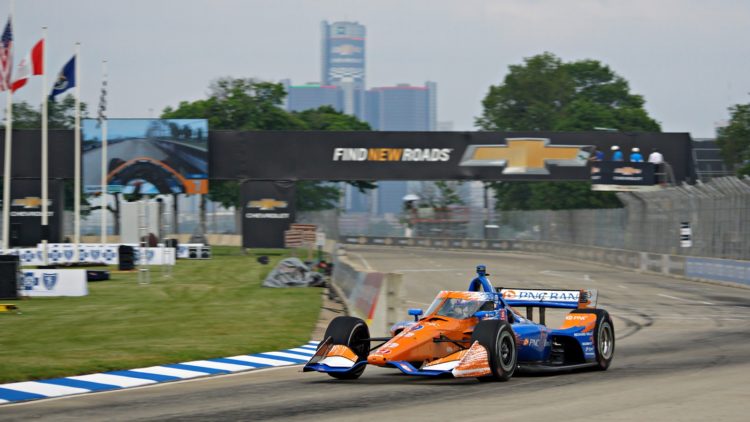 The iconic GM Renaissance Center will be the focal point of the new track layout in 2023. Photo: Kevin Dejewski

The Detroit Grand Prix will be moving from Belle Isle to downtown Detroit in 2023, and more details of the new location have been revealed in a kickoff conference held on Tuesday.

After having moved away from downtown in 1992, the combined IndyCar and IMSA event will return to the heart of the city after next year’s final race scheduled on the island.

The downtown course will feature 10 turns, and a moderate amount of elevation change, spread across a relatively-short 1.6 miles.

Notable details included the possibility of having half the track open for free spectator viewing, and a pit lane that has boxes on both sides of the road, although the exact details of these features are unclear at this time.

The idea for the relocation came together relatively quickly, with the initial idea being pitched to city leaders after the success of the new Music City Grand Prix in August, and the Detroit layout was designed and approved in eight weeks’ time.

The circuit will completely encircle the GM Renaissance Center, which is visible on the horizon from the event’s current location two miles away.

The circuit’s design has also been deliberately created to minimize disruption to nearby vehicle and pedestrian traffic, and local businesses were consulted throughout the process.

Even the Detroit-Windsor Tunnel, which funnels 13,000 vehicles per day through the border crossing with Canada and emerges from below ground in the interior of the proposed circuit, is expected to remain open for business.

Being that the course runs through the heart of downtown, cars will be running just feet from multiple iconic sculptures, including the Michigan Labor Legacy Monument and the Monument to Joe Louis, commonly known as “The Fist.”

Josef Newgarden, who was on hand to help promote the event, said, “I love the enthusiasm of bringing this back downtown.  It really makes a ton of sense.

“As a driver, I’m super excited about the unique challenge to try something new.  I’ve had the great opportunity of racing on Belle Isle for the last 10 years.  Always love coming to Detroit.

“I got to drive the track for about an hour this morning.  It really is a great layout.  I think it’s going to be fantastic for racing.  As a driver, that’s the most important part.  I think they’ve done a really good job.”

The 2023 Detroit Grand Prix will be run on June 2-4, the same weekend as the current event that is run on Belle Isle.