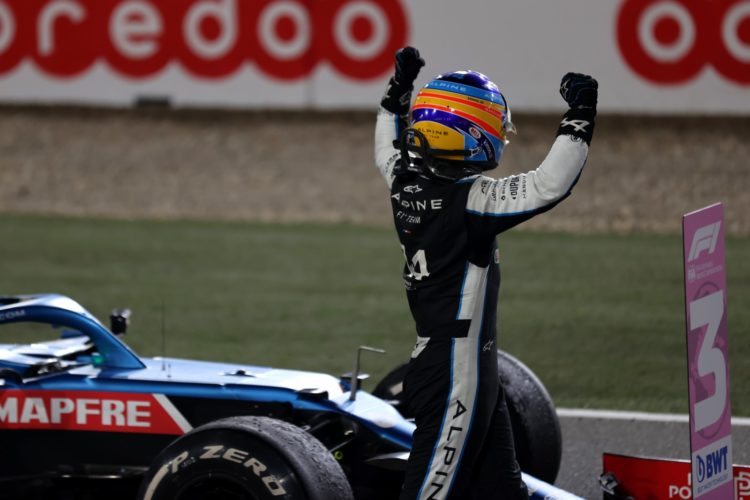 Fernando Alonso described an end to his prolonged wait for a Formula 1 podium as “unbelievable” after taking third in Qatar.’

Alonso held third through much of the race upon Formula 1’s first visit to Losail, having started third, and managed a one-stop strategy to fend off Red Bull’s Sergio Perez.

“Yeah, unbelievable,” he said. “Seven years, but finally we got it. We were close a couple of races but not enough. Sochi was the last possibility.

“Obviously, a long wait from the last podium. 2014, and yeah, happy for this one. I think we executed a good race, one-stop strategy, and yeah, the car was great all weekend long and in qualifying the pace obviously helped to start at the front.

“Also, with the penalties of this morning. We overtook [Pierre] Gasly in Turn 2, that also helped our race, to have a little bit cleaner air and yeah, obviously a long wait.

“Your career sometimes goes up and down. I had wonderful moments two, three years ago winning Le Mans, winning the World Championship in Endurance etc.

“But obviously coming back now in preparation for 2022, and the new rules and have this podium now, at the end of the year, it feels really nice, and I think we are more ready than what we were 10 months ago.”

The podium, along with fifth for Esteban Ocon, enabled Alpine to open a sizeable 25-point gap over AlphaTauri in the battle for fifth in the standings.

“We honestly were thinking of very little points between us here, Saudi and Abu Dhabi but obviously this 25 points and margin makes things a little bit easier for us,” he said.

“But we cannot relax. Anything can happen on the next two events, and we need to keep the focus high and hopefully deliver more points for the Championship.”