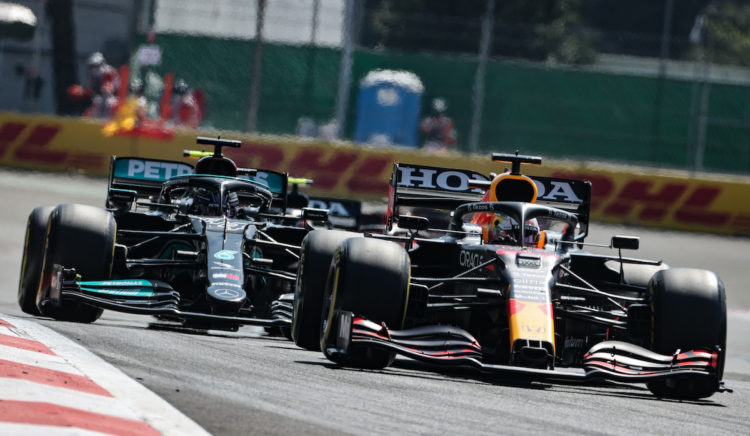 The Mexico City circuit dedicated to the Rodriguez brothers marked a very important stage in the Mercedes v Red Bull fight, as the momentum looks to have swung in the latter’s favour, with a dominant win by Max Verstappen to take a 19-point lead.

The track, which sits at more than 2,000 meters of elevation and therefore has very thin air, is very demanding from a technical and engine point of view, particularly in terms of cooling requirements.

The layout of the circuit favours the characteristics of Red Bull’s RB16B and proved a bit more difficult for the Mercedes W12, despite their stunning qualifying display.

Ferrari and Red Bull looked to maximise their result compared to direct competitors McLaren and Mercedes, thanks to a circuit with few fast corners, which are mostly at 90°. In circuits of this kind, defined as “rear limits” for tyres, Red Bull enhances its performance more than its rival Mercedes.

To cope with the thinner air, all the teams have adopted high downforce aerodynamic solutions. Red Bull itself, which has become accustomed to adopting rear wing solutions with less impact than the competition, chose for Mexico an aerodynamic configuration seen in circuits such as Monaco and Hungary. The rear wing seen on Verstappen and Perez’s car features a horizontal main plane, and not the classic “spoon” shape used in Austin and in most of the races this season.

On this aspect, it can be seen that Mercedes instead needs more downforce at the rear than Red Bull. Mercedes’ aerodynamic solution with regards to the rear wing is the same as that used in the circuit of the Americas, with the airfoil set for maximum downforce. In Austin, Red Bull was once again able to opt for a wing with less incidence, without losing too much in terms of downforce. Mercedes, on the other hand, needs to have a rear that has a lot of downward thrust to generate grip.

The W12 is also characterised by the deck wing – an additional airfoil behind the engine cover – which Red Bull has never used this year. In Mexico, the solution seen in the race and in qualifying in Austin was confirmed, with a double horizontal profile to better manage the flow under the rear wing. This solution is different from that traditionally used on the W12, with a single arched profile that offers less drag.

On the Power Unit front, Mercedes seems to have gone full power in the last few races, especially since the Turkish GP. Lewis Hamilton has not yet fitted unit number 4 as far as the hybrid is concerned, but what worries most about reliability is the endothermic unit (ICE).

The Mercedes Power Unit is characterised by the use of a very miniaturised turbine-compressor unit, which was likely stressed by the thinner air in Mexico, and Hamilton alluded to this over team radio. This would also result in an increased effort on the MGU-H electric motor generator, which is keyed directly on a shaft interposed between the compressor and the turbine impeller.

On the W12 the reliability discourse does not seem to give much certainty, but it is important to underline that all the cars with Mercedes Power Unit have tighter engine covers than the competition.

Above all, Red Bull has made its debut on the Hermanos Rodriguez circuit with a new bodywork, much wider at the rear to accentuate the escape of hot air as much as possible. The thin air does not allow you to be safe with the reliability and overheating of the electrical part.

The image shows how the bodywork is much higher than the reference of the upper arm of the rear suspension.

At Honda they have been very cautious on the reliability front, and it is clear and obvious that those who use the Mercedes Power Unit do not have all this great need to open the bodywork for thermal disposal.

The Milton Keynes single-seater, on the other hand, continues to stand out for the amount of updates it brings to the RB16B from race to race. To fully adapt the car to the characteristics of each circuit, Adrian Newey and colleagues leave nothing to chance and work on every single detail. In addition to the engine cover designed specifically for Mexico, asymmetrical cooling intakes were seen on the sides of the RB16B’s cockpit in Austin.

The real technical innovation for Mexico also concerns the management of brake disc temperatures, with a revised front brake duct once again. Red Bull has modified the air ducts that bring fresh air to the discs that become red-hot in the sudden braking on the Mexican circuit. After changing the shape of the entire brake duct in Budapest (returning to a solution similar to 2020), Red Bull has revised the subdivision of the ducts again, in order to introduce a greater quantity of air inside the housing of the discs in carbon.