Technical Insight: Mercedes trick suspension could be the key to beating Red Bull 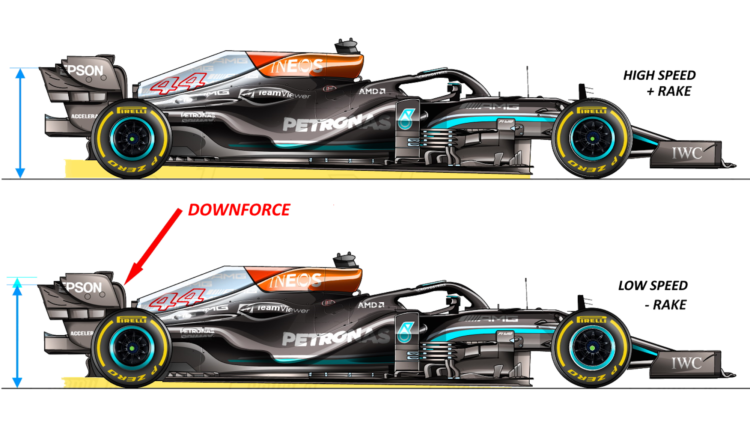 The duel between Mercedes and Red Bull is one of the most exciting of recent Formula 1 seasons. With such tight margins, small technical tweaks are making the difference on track and the momentum at the last race in Texas swung in Red Bull’s favour.

This year has been a hotbed of technical drama with a few flash points, such as flexible rear wings, rake changes and tyre pressures and now the magnifying glass has moved back to Mercedes, with its recently introduced rear suspension design.

After a showdown in Turkey, Red Bull team boss Christian Horner highlighted how their rivals car has returned to being the undisputed king of straights, attributing this improvement initially to the power unit, before turning their attention to the movement of the rear suspension.

Horner referred directly to the fact that Lewis Hamilton and Valtteri Bottas’ car uses a variable set-up in a straight line, acting on the rear suspension. The W12 lowers significantly at high speeds, effectively cancelling the rake angle.

The substantial reduction of the rake at high speeds reduces the frontal dimensions that the car offers to the air, in order to reduce the drag, to the benefit of top speed.

The dynamic set-up on the straights is in itself a completely normal practice in F1: as speed increases, a car equipped with offset wings undergoes an ever greater downward thrust, undergoing a natural change in ride height.

Given that all cars are subject to this phenomenon, what stands out is that Mercedes has been able to exploit this more effectively than others.

Since the beginning of the season, the W12 has been using more loaded rear wings than those of its direct competitor, Red Bull. The latter, on the other hand, stands out for being a car capable of generating a lot of downforce from high-efficiency components, such as the floor and diffuser, thus managing to have a lot of grip when cornering without overloading the wings.

The W12, a single-seater designed to work with a lower rake than Red Bull, needs more load from the wing in order to perform better on the rear tyres. The fact of having to use more wing has often proved to be Mercedes’ downfall this season, with the black arrow slower in the high speed corners than the RB16B.

In Turkey though this wasn’t the case and from the on-board cameras directed at the rear wing it became clear how the rear suspension is compressing into the third element, lowering the entire car far greater than expected.

Anything that is considered “active” suspension, like on the famous Williams of the early 90s, is not allowed under the regulations, but as the behaviour is purely mechanical in nature, it is deemed allowable, it is just more pronounced than on other single-seaters on the F1 grid.

Mercedes appear to be running a softer set-up at the rear to achieve this and although Red Bull expressed unhappiness with it, have opted not to take any action, believing it to be completely legal.

“We don’t feel that it is illegal, no,” said Horner. “It’s something that has been used historically. We’ve seen it used by them in the past, but obviously, what we saw in Turkey was quite an extreme version of it, which that circuit seemed to allow.”

However, this “trick” that the Brackley team would have found isn’t as advantageous on all tracks compared to Turkey. In Austin, it was less evident, and the team itself diminished its importance. According to Mercedes, there will be circuits where the advantage that could be gained would be minimal, such as Mexico (due to the thinner air) and Brazil. It should however be more evident in Jeddah and Abu Dhabi, which could perhaps be the decisive race for the fight for the drivers’ title.

Red Bull’s car does not behave to differently on the straight. The higher rake angle of the RB16B means that the car designed by Adrian Newey has been specifically designed to go towards a more “neutral” angle at high speeds, just like the Mercedes.

At the kinematic level, the W12’s suspension seems to work in such a way that the change of attitude is not uniform, but more sudden once a certain speed range has been exceeded and it’s this point that Mercedes must discover, through its set-up.