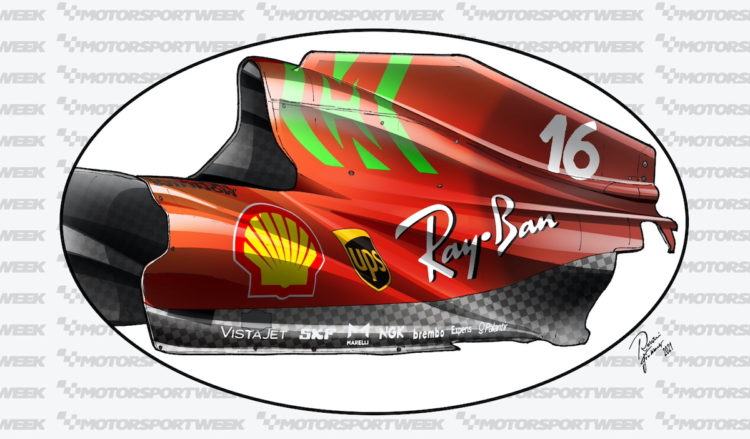 The Russian Grand Prix was ‘bitter sweet’ for Ferrari, as Carlos Sainz and Charles Leclerc endured very different races. In terms of performance, the SF21 performed well on the Sochi circuit, which has previously proven difficult for the Scuderia.

The race was an important one for Ferrari, which debuted its long-awaited power unit upgrade, dubbed 065/6. Ferrari’s season up to then had been run with an engine not fully evolved for 2021, with many of the hybrid parts taken directly from last season.

The technical regulations stipulate rules which freeze engine development, but Ferrari had yet to fully make use of its allowance and there remained the opportunity to bring updated hybrid parts. In Russia the team made use of that and introduced an updated hybrid component that concerned the ERS, MGU-K, battery and control electronics.

The Italian outfit had originally scheduled the upgrade for the Turkish GP next weekend, but rushed it through in order to collect data a race earlier at a circuit it expected to struggle at, but in fact proved quite competitive – however it was Sainz, with the old-spec, who finished on the podium. Leclerc, running the newer PU, finished a lowly 15th, but had to start at the back following a change of PU.

That doesn’t tell the true story though as data collected by the team showed Leclerc enjoyed a roughly eight-horsepower gain compared to Sainz. The Monegasque racer was entering eighth gear on the main straight sooner than Sainz. However Ferrari were cautious with the power, instead opting to collect data and mileage to prove reliability, rather than turning things up to the maximum.

The dyno tests highlighted some issues in the behaviours of the MGU-K, which led to a more cautious approach.

Leclerc, in addition to the new hybrid components, also used a fourth specification MGU-H and ICE (internal combustion engine), hence the penalties. The whole new hybrid component should be able to work with wider voltage ranges, between 800 and 900 Volts (by regulation the FIA ​​imposes a maximum of 1000 Volts).

Sainz, on the other hand, will suffer penalties in Turkey, with the Spaniard forced to start from the back when he takes the upgrade. Compared to Russia, in Turkey Ferrari could go more aggressive with power, raising the estimated 8HP gain to between 10 and 12HP in certain situations. The overall gain should be in the order of three tenths of a second on a track like the one in Istanbul.

All the updates to the Power Unit are also in view of 2022, when the aerodynamics will be profoundly different, but the engines will remain the same until 2024. The homologation of most of the components is scheduled for March 1, 2022, and Ferrari will bring a new internal combustion engine before then, while the current hybrid components will largely remain unchanged with only minor modifications.

Cooling management will certainly need improvement, a problem that mostly concerns the aerodynamic parts. Ferrari powered cars still struggle to close the bodywork without running into temperature management problems. In Sochi, despite the rain and falling temperatures, Ferrari preferred not to close the bodywork too much, using the intermediate version of the engine cover with less closed vents.

In the future, however, it seems difficult to be able to return to the levels of 2019 when Ferrari enjoyed a surprise engine advantage. For the two-year period, 2022-2024, the Power Units will be frozen, for reasons of cost, and it will therefore be very important to be able to bring to the track an engine that does not lose too much in terms of power towards Mercedes, which currently leads the pack ahead of Honda.

The profound crisis the Italian engineers had to go through in 2020 had radically upset the development plans present at Maranello in 2019. Being able to regain lost form with the sanctions applied by the FIA ​​to the Ferrari engine required a lot of work.

The 065/6 mounted to the SF21 at the beginning of the season, and redesigned for most of 2020, has revisions to the thermal management of the ICE, with a search for better efficiency in the combustion of the air-gasoline mixture. The exhausts have been revised when compared to 2020, as can be seen from some photos taken at the Ferrari garage with the bodywork removed.

The work that Ferrari had done during the design of the SF21 was very important, returning to a solution last seen in 2018, moving some radiant masses in the upper part of the car. Ferrari in 2019 had chosen to move all the radiators (including the electric, oil and turbo cooling radiators) in the sides, to taper the upper part of the engine cover and bring more air to the rear wing.

This was, however, one of the biggest problems of the SF1000, which suffered from drag problems due to an aerodynamic blocking that occurred on the inside of the sidepods. With the SF21, Ferrari has put part of the radiant masses back in the upper part, returning to an air-scoop with larger ears which channel the air to the radiators, allowing for smaller sidepods.

The reasons for this choice mainly concern aerodynamic needs, in order to be able to free mechanical mass from the sides and sidepods, and tighten the bodywork. Raising the centre of gravity and reducing the air flow to the rear wing paradoxically has benefits rather than disadvantages. The downwash sides, now present on almost all F1 cars, increases the efficiency of the floor and diffuser, sending more airflow to the lower part of the car, to the benefit of low drag downforce.

It will be difficult to understand if these aerodynamic concepts will be maintained even with next year’s cars, or if the centre of gravity will have to be moved back to the lower part of the car. Next year’s aerodynamics will have the greatest contribution from the underfloor, and not from the wings. This could also have an influence on the design choices of the engines, which are designed to also be functional to the aerodynamics of a single-seater. What we will see next year will partly revolutionise the way of understanding the fluid dynamics of an F1 car compared to today, also in terms of rake set-up.