Technical Insight: The setups of Red Bull and Mercedes at Sochi 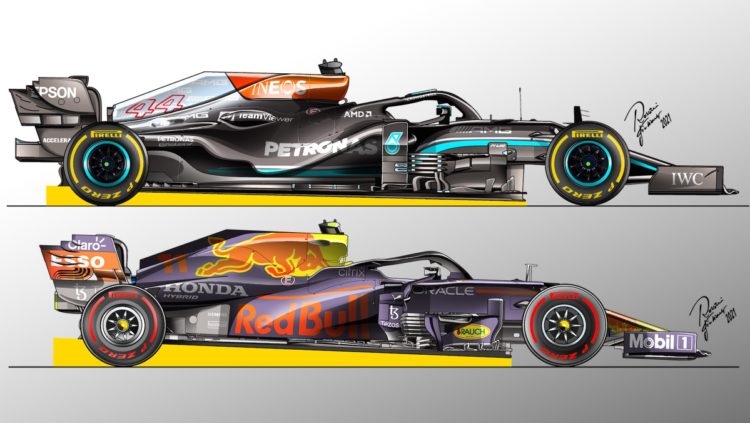 In Sochi the technical battle between Red Bull and Mercedes continued, in a phase of the season that enters a key moment in the fight for the world title between these two evenly matched teams.

On the track of the Russian Olympic Park, the Mercedes W12 confirmed what was expected; that it was favoured over the RB16B. Red Bull itself knew it had to take a defensive strategy against its Anglo-German rival, especially with the

It is no coincidence that it was decided in Sochi to introduce Power Unit number 4 on Verstappen’s car, which essentially mitigated the three-place grid penalty as the Dutchman would have to start at the back.

The Milton Keynes team once again diversified the set-up between Verstappen and Sergio Perez, and once again the RB16B was confirmed as one of the single-seaters with the skinner wings. Specifically on Verstappen’s car it was chosen to adopt a shallower rear-wing than his team-mate, in order to boost straight-line speed to help him recover in the race.

The gurney flap placed on the upper edge of the DRS mobile flap has been removed on Perez’s car. On the #33 car the main plane is more unloaded, almost neutral in the outermost part, but the gurney flap on the DRS edge has been maintained. The technical choice adopted on Verstappen’s car also provides for a simplified endplate, in which the fringes are absent under the words “ESSO”. This solution was adopted in purely low downforce circuits, and is quite extreme for a track like Sochi.

Red Bull knows it can count on its floor to contribute enough downforce, which generates strong grip in the fast corners, giving it options when it comes to how much wing to run, often allowing the team to run skinnier wings, so much so that we have never actually seen it adopt deck wings over the course of the season, not even on circuits like Monaco and the Hungaroring.

Also on the Mercedes front, some set-up comparison works were carried out during the weekend, but Toto Wolff’s team always tends to adopt solutions with more rear wing than Red Bull. The rear wing used in Sochi by Mercedes returns to the double-pylon configuration compared to Monza, but Hamilton and Bottas tested the two different mobile flap configurations on Friday.

The regulation this year also bound the number of rear wing configurations that can be used, requiring the approval of a maximum of two different DRS flap specifications. Mercedes has often run a similar setup this year to the one seen in Sochi, comparing a wider flap and one with a reduced string. On Friday Hamilton used the skinniest setting, while Bottas used the version which provides the most downforce, just as he has already done in several races (such as Portugal and Azerbaijan).

Due to the rain over the Russian race weekend, the Brackley team standardised the choice for both drivers, opting for a W12 with greater downforce.

The W12 still seems to carry some rear stability problems, which lead to oversteer coming out of slow corners, a problem that impacts Hamilton more than Bottas.

Over the course of Friday, the Brackley engineers also had Bottas try out a new front wing configuration which was new in the layout of the last flap at the top.

The last flap, modified in the outermost area, tends to seek a greater out wash effect at the expense of a greater wing shape, bringing the flow of air outwards from the front wheels. The wing was then set aside for qualifying, as it was going to unload the front. A change that goes in the same direction as what Ferrari and Aston Martin did, which introduced changes only in the two flaps that regulate the overall incidence, to be used in low load settings. This obviously allows you to change the front downforce levels, without having to adopt completely new wings.

Under budget cap, and with the technicians fully concentrated on 2022, this is the only alternative that the teams have to adopt different aerodynamic solutions, without impacting their budgets too much.