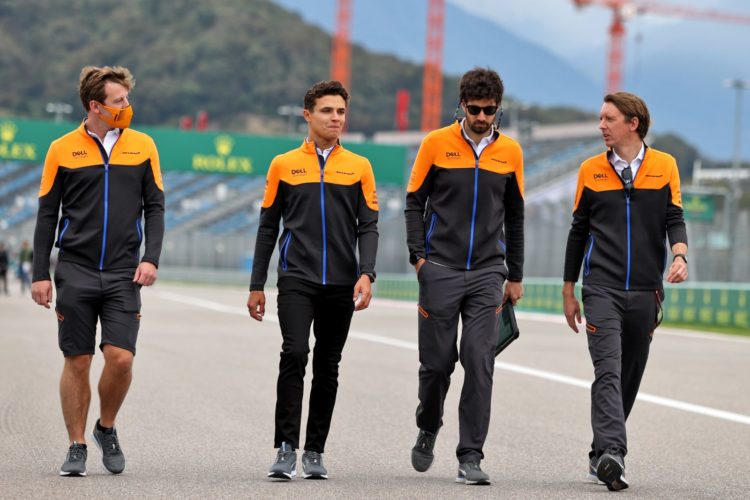 Lando Norris says McLaren is unlikely to be able to repeat the level of performance it showed at Monza at any remaining event in Formula 1 this year.

McLaren displayed strong speed throughout the Italian Grand Prix weekend, finishing fourth and fifth in qualifying and third and fourth respectively in Sprint.

Norris went on to finish the race in second place, behind team-mate Daniel Ricciardo, who brought McLaren’s near nine-year win drought to a close.

While Norris has taken three podiums previously in 2021, at Imola, Monaco and the Red Bull Ring, the Briton doubts the MCL35M can be a win contender elsewhere.

“Probably not, we will try our best,” he said on replicating Monza again this year.

“There are some tracks that we are definitely better at and some we are worse at, but there are these opportunities that arise for us that we are good at taking advantage of and being in the right position at the right time.

“We had an amazing weekend in Monza. It was a bit of a shock for everyone, but we were there on merit and were very quick all weekend.

“But it does not mean we will be like that every single weekend from now on. We did not find anything magical. We had a better weekend and things flowed better for us, and the car suited the track. That is the way it is going to be for the rest of the season.

“Some tracks will be better and will be more competitive and some tracks work in a struggle more. But how good or bad we will be I am not too sure yet.”

McLaren holds third in the Constructors’ Championship, 13.5 points in front of Ferrari, but expects the battle to ebb and flow across the remaining eight rounds.

“We had a tough weekend in Zandvoort and they pulled away a decent amount,” said Norris.

“And then we got them back in Monza. I wished we could run away with it but I don’t think any of us will.

“It will go backwards and forwards, some races we will be better in some races they will be a little bit better. That’s the way it is. It keeps us on our toes. It is exciting and challenging.”