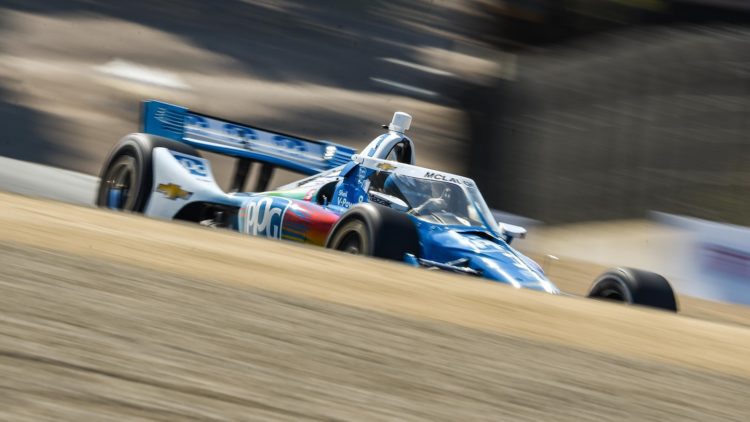 McLaughlin shot to the top of the timesheets in the final minutes. Photo: IndyCar

The rookie’s Team Penske Chevy was hooked up the entire session, and he was able to stay on course despite the slippery conditions.

Other members of the Team Penske crew joined McLaughlin up front, with both Simon Pagenaud and Josef Newgarden putting in fast laps early before dropping down a bit in the closing minutes.

Colton Herta recovered from a harrowing trip through the gravel to knock out the second fastest time of the day, however, matching his position from Friday.

Current points leader Alex Palou was able to manage the third best time of the morning, and he will look to stay up front for qualifying so that he can do his best to lock up the championship this weekend.

Dale Coyne Racing also had a good session, with Romain Grosjean and Ed Jones running near the front for much of the morning outing.

Dalton Kellett was the first driver to bring out the red flag, when his AJ Foyt Chevy took a quick trip into the tire barriers in turn four less than 10 minutes into the session.

Rinus VeeKay crashed in the exact same location near the end of the session, and also needed assistance to remove his car from the barriers.

Multiple other drivers took harmless trips through the gravel as well, kicking up loads of dry California dust along the way.

Drivers up and down the grid struggled with grip just as they did in the first practice session, with both the front and the rear ends of their cars giving up traction under the demands asked of them.

The track is expected to accept a layer of Firestone rubber as the weekend goes on, but that has not materialized into added grip by Saturday morning.

In all, 20 minutes of the 45-minute session were unavailable for practice due to the time needed to remove the stricken cars.

A return to the iconic circuit

The IndyCar series has visited the iconic California track many times before, mostly as the CART Series, but there was a large gap between 2005 and 2018 when Laguna Seca was not on the calendar.

After holding the event for a single year in 2019, the pandemic forced the event to be cancelled in 2020.

On account of the long absence, a full third of the field has never raced on the popular track in an IndyCar before this weekend.  Of those that have, only two have won a race here before, with Colton Herta and Helio Castroneves completing the short list.

Some teams have chosen to test at Laguna Seca throughout this season, including Andretti Autosport, giving some drivers the familiarity of recent track time to help their cause.

There is no more time to practice, however, as the next on-track session is for the knockout qualifying session, which gets underway at 5:00 PM Eastern Time.