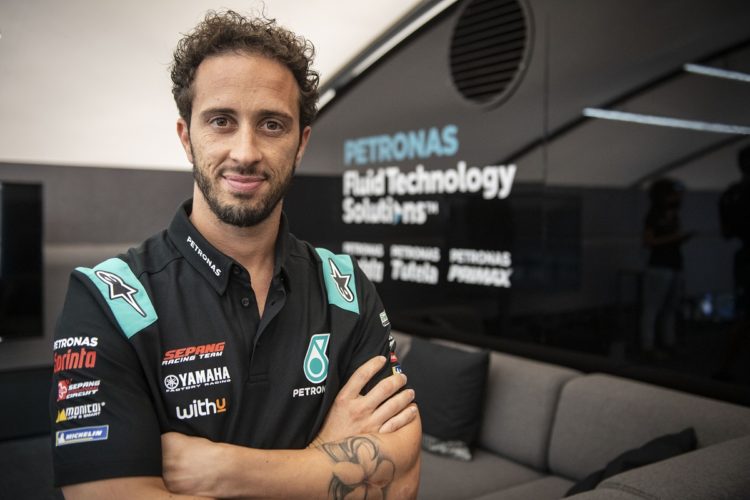 Petronas SRT has finally confirmed that Andrea Dovizioso will compete with the squad for the rest of the 2021 MotoGP season, as well as 2022, from this weekend at Misano.

The Italian was heavily rumoured to have completed a deal for the outfit – which will undergo an ownership shift this winter following the sale of the squad by current owners Sepang International Circuit – as a result of the sacking of Maverick Vinales from the factory Yamaha fold last month.

Erstwhile SRT pilot Franco Morbidelli will therefore join Fabio Quartararo in the factory Yamaha team as he makes his return from injury in the San Marino Grand Prix this weekend.

Yamaha has confirmed that Morbidelli has signed a contract with the factory team through 2023.

The new Yamaha satellite – which will be owned by current Petronas SRT management figures Razlan Razali and Johan Stigefelt – will continue to run a current-spec M1 for the Italian.

The plans for the new team are set to be unveiled at Misano this weekend, including a title sponsorship deal from Italian fitness brand WithU, hence Dovizioso’s hiring.

“Although I didn’t expect to be back in MotoGP like this, I never closed the door on it and it’s good to be here with Yamaha and Petronas Yamaha SRT,” said Dovizioso.

“I wanted to try to enjoy a new situation and I’m really happy to be back. It will be interesting to be on a completely different bike to that I rode before and I’m looking forward to the experience.

“I visited the team in Aragon and it felt almost like it was 2012 again and sitting on the Yamaha bike felt just as good. It was great to have a first sit on the bike and do the initial adjustments, so that we’re already one step ahead of FP1 here at Misano.

“I will need to get on track to understand the details and it would have been better to have had a test before jumping into a race, but I start with no pressure and it will be great to get going in Misano for the final five races of the season.”

Morbidelli will make his factory debut following four seasons as an independent rider in MotoGP, the 2017 Moto2 world champion having spent his debut campaign with the now defunct Marc VDS Honda operation before spending two-and-a-half years with SRT.

He finished runner-up to Joan Mir in last year’s championship.

“I’m very pleased and happy about facing this weekend and this highly anticipated new chapter with the Factory Yamaha team,” said Morbidelli.

“I’ve been trying to recover as much as possible for the final stage of this championship. I wanted to make my comeback at a track I know well and have great memories of, like Misano.

“I’m looking forward to jumping on the bike and starting my journey with the Monster Energy Yamaha MotoGP Team. Of course, I need and I want to thank all the people who made this happen, starting with Ito-san, Lin, Maio, Sumi-san, the VR46 Riders Academy, and all other people who made this collaboration possible.”

Dovizioso has remained on the sidelines for the bulk of the 2021 campaign after electing to leave Ducati’s factory team at the end of last season following growing animosity between the two parties.

He turned down an offer from Aprilia but made a U-turn by signing on as its test rider, before emerging as a candidate for Yamaha in the wake of Vinales’ abrupt exit.

The 15-time MotoGP race winner looks likely to be joined by current SRT Moto3 pilot Darryn Binder, the South African set to be the first rider since Jack Miller to make the step directly from the lightweight class to the top class, partly as a result of the outfit’s Moto3 and Moto2 teams being shuttered.

SRT Moto2 ace Jake Dixon is also in the conversation for the last premier class berth available for 2022 having raced the M1 at his home GP at Silverstone as well as last weekend at Aragon, though according to German publication Speedweek looks more likely to make a switch to the Intact GP squad in the intermediate class net season.