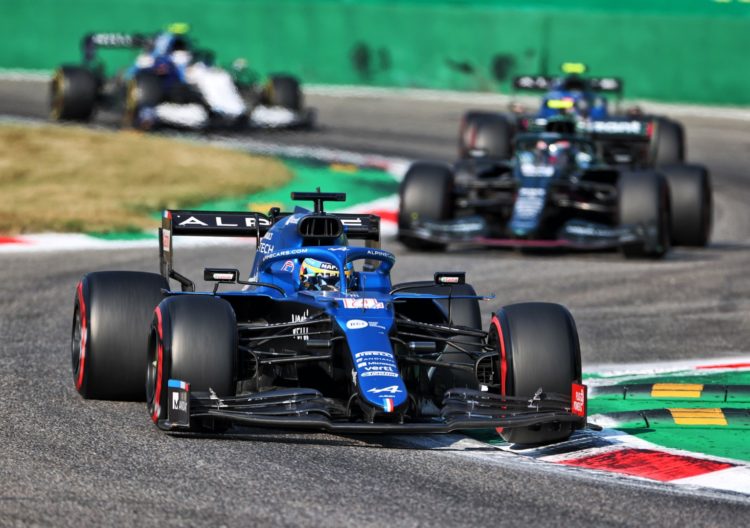 Fernando Alonso has suggested that Alpine’s race pace is inferior to that of rivals AlphaTauri and Aston Martin but that it is executing a better job as a team.

The three teams have been involved in a battle for fifth in the standings, adrift of the McLaren/Ferrari fight for third, but ahead of the Williams-led scrap for eighth.

Alpine holds fifth, on 95 points, with AlphaTauri on 84, and Aston Martin playing catch-up on 59.

Alpine dropped out in Q2 on Friday but recovered to have both of its cars in the points on Sunday in Italy, with Alonso eighth and Esteban Ocon rounding out the top 10.

“We are delivering the job on Sundays,” said Alonso. “We don’t have maybe the car to compete in pure performance with AlphaTauri or with Aston Martin, but we have the team to compete on Sundays and to score points.

“We will try to fight for this fifth place in the constructor championship until the end, if possible.”

Alonso expects the performance levels to fluctuate across the remainder of the season.

“I think there’s going to be ups and downs for everybody,” he said. “We saw in this triple header that we are up and down in the level of competitiveness and on the grid.

“At Spa we were okay on the dry. We were not okay with the wet. At Zandvoort we were okay all weekend. At Monza, not. So I think it’s track dependence.

“I don’t know exactly in Russia, Turkey and Austin, how it’s going to be. I think it will be better. I will say that Monza was already in the calendar as one of the worst.