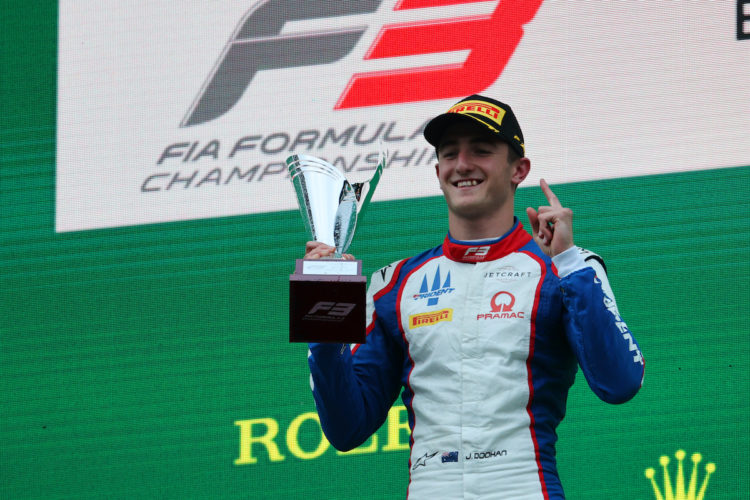 Jack Doohan ended the FIA Formula 3 weekend at Spa with another wet victory in Race 3 to throw the Australian into contention for the championship.

The race started behind the Safety Car before a rolling start commenced for a 14-lap event. The only overtake in the first four laps inside the top ten was Johnathan Hoggard moving ahead of David Schumacher for eighth at La Source.

Schumacher fought back by passing Hoggard at La Source on Lap 5 before championship leader Hauger followed through at Les Combes on the same lap to go up to ninth.

Also on the same tour, Martins made a daring move around the outside of Doohan in the battle for the lead at Turn 9 but the Frenchman returned the position, as he put all four wheels off the track by passing him.

Lap 6 and Novalak overtook Sargeant at Les Combes for fifth place prior to catching Smolyar and Collet in the closing stages.

Hoggard tussled with Leclerc three laps later for the final points position but the Jenzer driver went too deep into Malmedy and an excursion through the gravel demoted him to 16th.

The following tour saw Hauger pull off another crucial move on Schumacher for eighth at Campus around the outside, thus two more points towards the championship.

With three laps remaining, Vesti nipped past Sargeant for sixth on the Kemmel Straight. Another couple of points to keep the Danish driver in the frame for the title.

Doohan fended off Martins to take the chequered for the third time this season, while Smolyar was third for ART.

Collet was fourth after Novalak went wide at the final chicane whilst trying to overtake him before the crossing the line in fifth.

Hauger’s lead in the championship has come down to 25 points between himself and Doohan with two rounds remaining and six races left.

The first of those rounds is at Zandvoort in a week’s time, part of the Dutch Grand Prix weekend.