Doohan victorious in F3 in wet Race 2 at Spa 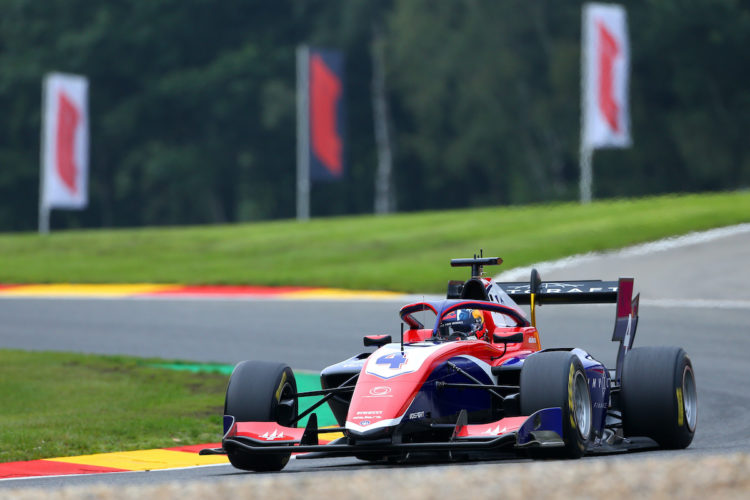 Jack Doohan won out for Trident in a wet Race 2 at Spa in FIA Formula 3 to close in on championship leader Dennis Hauger.

Doohan led from reverse-grid pole at the start ahead of team-mate David Schumacher, Logan Sargeant and Caio Collet.

Lap 4 and Johnathan Hoggard found himself in a spin at Pouhon following a coming together with Arthur Leclerc in a battle over ninth position. Both drivers continued but Hoggard dropped to the back of the pack.

The top ten remained the same until Matteo Nannini spun whilst making an overtake on Hunter Yeany on Lap 9. The Italian stalled, which promoted the Virtual Safety Car before it upgraded to a Safety Car.

As the rain returned to the track, Hauger pulled off an overtake on his PREMA team-mate Leclerc on the restart to go up to ninth at La Source.

That proved to be the last of the track action, as a collision at the top of Raidillon involving Calan Williams and Amaury Cordeel brought the Safety Car out again and the race ended under it.

Doohan led Schumacher over the line for his victory of the year and a one-two for Trident. Sargeant was third ahead of Collet and Novalak in fifth and also collecting the points for the fastest lap.

The top ten was rounded off by Vesti, Martins, Smolyar, Hauger and Leclerc.

The gap in the championship between leader Hauger and Doohan in second is reduced to 46 points with one more race still to come this weekend.

The final FIA Formula 3 race of the Belgian Grand Prix weekend will be on Sunday morning at 10:40 track time.