Technical Insight: Have Mercedes regained the advantage over Red Bull? 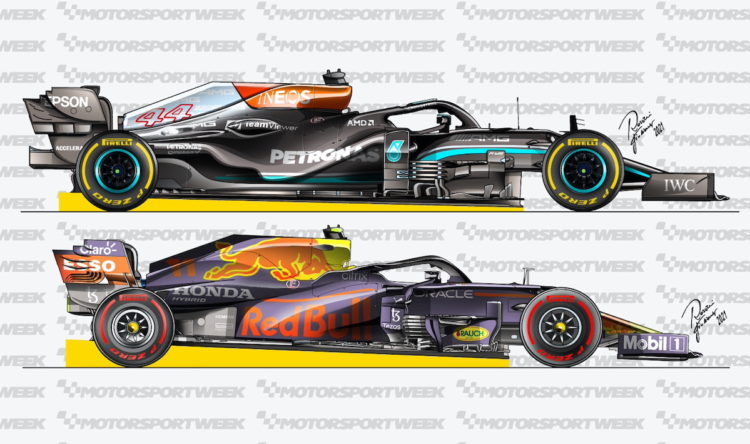 Mercedes head into the summer break in a slightly more relaxed attitude than many would have expected just a handful of weeks ago. Having regained the points lead in both the Constructors’ and Drivers’ championships, the team are once again favourites for the season.

Red Bull on the other hand have some work to do after losing a substantial points lead following some unlucky results in Britain and Hungary.

The tables turned at Silverstone when Max Verstappen and Lewis Hamilton crashed on lap one. Verstappen would retire and Hamilton would go on to win, closing the gap by some 24 points (he scored 27 thanks to the win and second in the Sprint event, but Verstappen scored three points on Saturday).

Mercedes came to that race with upgrades, but we never got the full story. Might Verstappen have romped off into the distance had they not collided? So our attention turned to Hungary where Hamilton took pole position with team-mate Valtteri Bottas second. Advantage Mercedes…? Perhaps, but we’d need to wait until the race to be sure.

Unfortunately a turn one pile-up, triggered by Bottas, meant we wouldn’t find out, as Verstappen suffered heavy damage to his car. So the question of whether Mercedes have regained the advantage remains somewhat of an unknown…

But we can be sure that the work Mercedes have done in bringing minor updates at Silverstone and again in Hungary, looks to have at least brought them back into contention, with the innovations introduced at Hamilton’s home race proving fundamental in regaining balance and aerodynamic efficiency.

Mercedes’ approach was different from that of Red Bull, which chose to spread its technical innovations out. Mercedes, on the other hand, has decided to concentrate all the technical innovations in a single weekend, effectively going from a type A single-seater to a type B (albeit not quite to that extreme), to obtain airflow that generated less blocking and resistance to advancement.

Mercedes revisited the design of its bargeboards and sidepods, with changes to the flow deviators which now manage the airflow in a very different way, with the aim of better laminating the flow over the aerodynamic surfaces. A job that obviously required months of planning and development with the use of computational fluid dynamics (CFD), after having thoroughly analysed the data collected during the opening races of the season.

The modifications to the shape of the bargeboards and sidepods will also affect the airflow that will pass through to the floor, which can be considered as the nerve centre of these 2021 cars. Therefore changes were also required in this area. After Silverstone, the Brackley-based engineers, under the technical guidance of James Allison, decided to set aside the corrugated edge solution which surprised the paddock when it was unveiled at pre-season testing.

In fact, the floor is now almost completely flat in order to promote a more uniform flow. The wavy-floor was perhaps an overly-aggressive decision given the limited resources available to develop the W12 both from a time and budget perspective, therefore it was easier to drop it to instead focus on a simpler solution.

Mercedes was also smart in copying parts from other teams, including Red Bull itself, which was running a similar series of vortex generators at the base well before Mercedes.

After fixing its aerodynamic weaknesses, Mercedes looks to have cut, or perhaps even wiped out, the gap to Red Bull. Of course there remains some doubt as to what we would have seen at Silverstone and Budapest had they been less dramatic races.

In Hungary, Red Bull certainly struggled more than usual, especially if we consider the performances of Bottas and Perez, with the Mexican in clear difficulty by comparison.

The Mercedes vs Red Bull duel is also taking place off track, not only with the controversy related to the accident between Max and Lewis, but many have pointed that finger at Pirelli, which introduced a new construction of tyre at the British GP in response to Verstappen’s failure in Baku, which cost him a certain victory.

Undoubtedly, Red Bull has proved to be the best car for a good part of this season also in terms of its tyre management, both in getting them to the correct operating window and being kind in terms of wear, so perhaps a small change in construction has hindered Red Bull, or helped Mercedes?

It is not so much Red Bull that has regressed, but Mercedes that has improved. There are strong doubts and uncertainties as to whether the Mercedes improvement is linked exclusively to the new tyres, but it is obvious that when there is a change of rules there are always those who gain and those who don’t.

The qualities of the RB16B in generating downforce from the floor and diffuser are accentuated by the fact that there is always a tendency to unload the wings, despite Budapest being a notoriously high downforce circuit. The team ran a lower downforce configuration on Saturday and Sunday in pursuit of top speed.

In managing the right balance, Red Bull has taken a safer approach from the point of view of temperatures, with a wider engine cover at the rear. In addition, the engineers of the Milton Keynes team have been careful with managing brake temperatures, adopting larger front air intakes, very similar to those that were present on last year’s car. The shape of the ducts used at Silverstone cut inward, whereas for Hungary they were opened up to increase airflow and cooling, but also this brings with it negative drag.

The extreme rake set-up of the RB16B provides Verstappen and Perez’s car with a rear capable of generating a lot of downforce from the floor alone, but at the same time increases the surface area that hinders the advancement of the air flow. Also for this reason, the car designed by Adrian Newey prefers set-ups with less incidence of wings, without the use of auxiliary components such as the T-wing.

Strengths of the RB16B are corner exit and low drag of the wings, while Mercedes still manages to bring more speed into corner entry. In view of Spa, when F1 recommences at the end of August, it is difficult to say who will be the favourite.

The Belgian circuit has two sectors (the first and third) that favour top-speed, while the second sector has many medium-high speed corners, which will favour Red Bull. The difference, as always, will be finding the right aerodynamic and balance compromise.

There is also the suspicion that Mercedes may have found a few more horsepower from their Power Unit (which we know is impossible due to the Power Unit freezing). It is more plausible that working together with Petronas, it may have been possible to slightly improve the performance of the internal combustion engine through the use of more efficient additive oils.

Whilst Belgium is Verstappen’s second home race, this writer is tipping Mercedes to outshine Red Bull, but it will be close, and that’s very exciting!