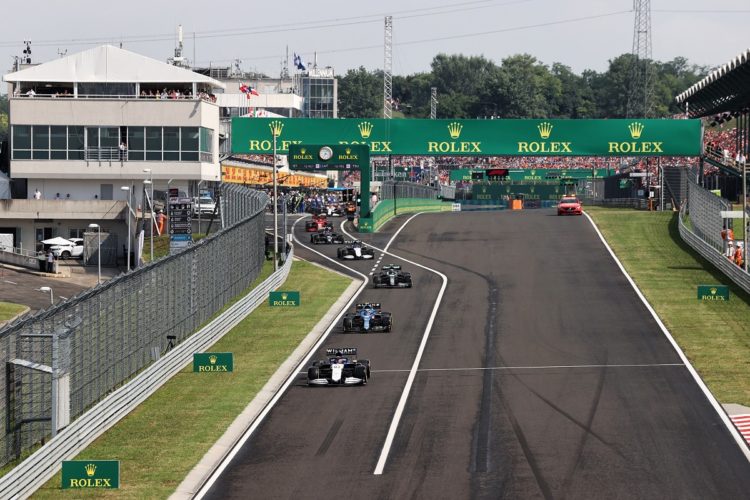 George Russell has thanked the stewards for using “common sense” after he illegally overtook cars at the race restart in Budapest.

Following a red flag period that was issued on the opening lap of the Hungarian Grand Prix due to a multi-car collision at Turn 1, a standing restart was called.

However, all drivers bar Lewis Hamilton pitted at the end of the formation lap to swap their intermediate tyres for slicks.

As they queued in the pit lane, waiting for Hamilton to pass by, Russell moved out of his pit box and to the head of the pack, which turned into the lead when Hamilton pitted on the following lap.

Russell, who went on to score his first points as a Williams driver, was instructed to hand back the positions – however the Briton believes he could’ve easily been handed a tougher penalty.

“Thanks to the FIA for showing a bit of common sense,” Russell said. “I guess they could’ve easily given me a drive-through or something, which would’ve been a bit harsh.

“In such a unique situation, everyone queuing up in the pit lane, I saw an opportunity and thought ‘let’s go for it’. I’m glad we were allowed to just hand the positions back, just a bit of common sense really.”

It marks Williams’ first top 10 finish since the 2019 German Grand Prix, as it jumps to eighth in the Constructors’ Championship ahead of Alfa Romeo and Haas.

“Tough, tough moments both personally and for everybody in the team. I’m emotional, it’s more than what the result today shows.

“I think it shows that it’s been worth it, that you should never give up. We’ve got here because when we were last at every single race in 2019, we didn’t stop fighting.

“It just sort of shows, no matter the situation, there’s always something to learn and you’ve got to give it everything out there.”