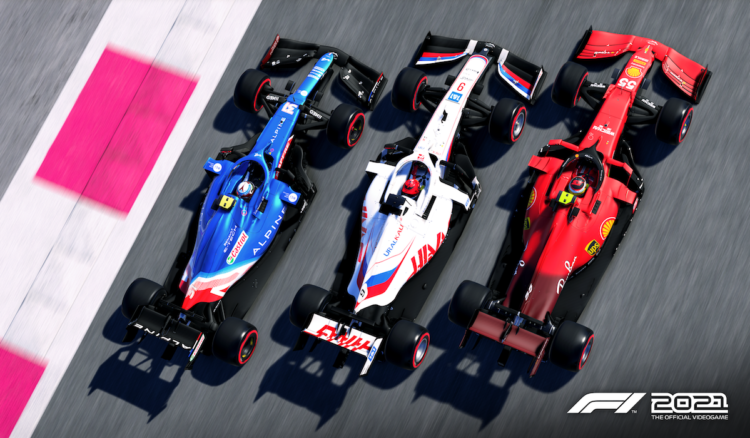 For over a decade Formula 1’s official video game has been produced by Codemasters, which has now been bought out by EA Games, and its latest installation will hit the shelves this week.

MotorsportWeek.com had the opportunity to bring you an in-depth look at what the latest feature has to offer with F1 2021, so let’s take a look, starting with the title’s newest development.

In 2019, Codemasters introduced a story to the Formula 1 game for the very first time, with players given a set of scenarios in which to take on the other fictional characters of Lukas Weber and the now infamous Devon Butler.

In this new 2021 edition, the story mode has been greatly expanded. At the start, you’re given the role of a young Aiden Jackson, who gets paired with the well-reserved yet vastly more experienced team-mate Casper Akkerman.

The 16-chapter story will take you through the various trials and tribulations the two drivers face, through playable scenarios across two seasons – which feel more genuine with the correct liveries and team apparel.

It is an inclusion that enhances the realism of the championship; the use of motion-capture technology, the prompted short phone calls, and the presence of a social media account, have given it a more genuine feel with greater realism – it may well be the closest most of us come to the real thing!

We can only hope the close relationship between Liberty Media, Codemasters and its new owners EA Games can further grow the franchise.

The ‘My Team’ feature remains, but has been given a few positive tweaks.

In the previous edition, you managed every aspect of the growth of your team. In this revised take, you can change the level of control, or if you want to automate some of the features such as facility upgrades or how regularly involved you are in key team decisions, you can.

That means you can strike the right balance between being a team owner, engineer, strategist, or simply just racing.

A further change is the way in which resource points are earned in practice sessions. In previous editions, you had to rinse and repeat this process several times each weekend to earn those points.

Now, you have been given a slightly lessened workload to aid the process of completing the weekend; there is even the option to simulate the sessions to complete the tasks but with an increased probability they may not succeed.

The choice is left entirely to you.

Last year’s game featured improvements in the handling of the cars to make them feel more grounded, and for 2021’s edition further progress has been made in this area.

The damage model has also been pushed a step forward at the simulation level; current F1 cars are reliant on every wing and flap setting and the developers have tried to replicate this approach.

Striking a kerb too hard or grazing a wall in Monaco or Baku for example could mean you’ll lose a piece of carbon fibre, costing you a handful of downforce points, which makes you think twice about going for a move.

For those who feel they need to be more casual with their gameplay, there are several options to do so within the difficulty settings which can be tweaked to your preference.

It feels as if Codemasters have gone another step further to help cater to both ends of the spectrum without compromising the core elements of the game; the casual fan that just wants to attack a circuit; and the simulation aficionados – there really is something for everyone!

The penalty system is also more stringent, picking those who transgress track limits or the fools who think it’s a destruction derby which should hopefully help to create a more pleasant online experience.

Split-screen multiplayer, and a two-player career mode, has been retained, enhancing the gameplay for those that want to team up with friends.

While the classic cars have taken a departure in this title – which is slightly disappointing, but perhaps overdone in previous titles – the game benefits from the added attention to detail.

Due to the global pandemic’s impact on the F1 calendar, the schedule inside the game has also been affected, even if the pandemic doesn’t exist within a virtual landscape.

Of the amended 2021 calendar Imola, Portimao and the new Jeddah circuit are not yet included, though they are being developed, and will be available in a free downloadable extra when available.

A handful of circuits have made, or are in the process of making, layout revisions for 2021, including Barcelona, the now-cancelled Melbourne, and Yas Marina, but these do not feature in the new game. It is not yet known whether Istanbul Park, a replacement for Singapore, will be included.

Codemasters has really made another concerted effort to improve this title, even if it meant removing some loved features to do so, and it’s certainly paid off.