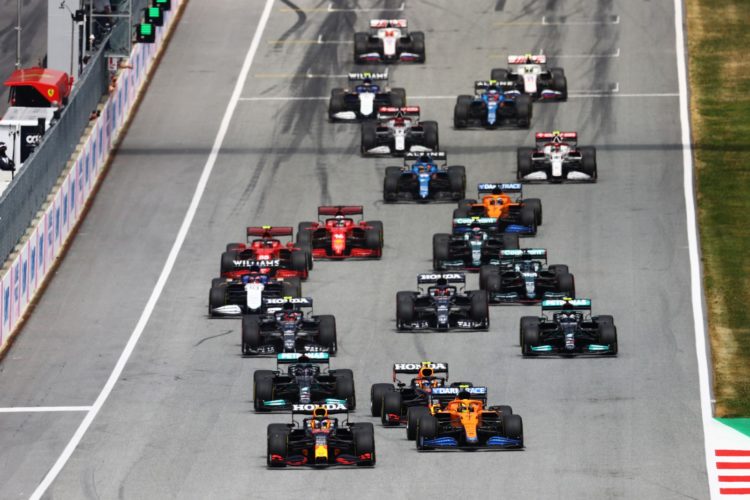 SPIELBERG, AUSTRIA - JULY 04: Max Verstappen of the Netherlands driving the (33) Red Bull Racing RB16B Honda leads the field into turn one at the start during the F1 Grand Prix of Austria at Red Bull Ring on July 04, 2021 in Spielberg, Austria. (Photo by Clive Rose/Getty Images) // Getty Images / Red Bull Content Pool // SI202107040226 // Usage for editorial use only //

Almost a third of the drivers on the 2021 Formula 1 grid are halfway or more towards a one-race suspension after a litany of penalty points were distributed in Austria.

Formula 1 drivers receive penalty points for indiscretions that occur during a grand prix weekend and under regulations have their licence suspended for one round if they reach 12 within a 12-month period.

No driver has yet fallen foul of the system since its introduction in 2014.

There has been plenty of opportunity for drivers to rack up points across the past 12 months with 26 grands prix having taken place during that period, owing to the 2020 season being delayed by the pandemic.

McLaren’s Lando Norris leads the way on 10 penalty points though two of those will be wiped from his record prior to the next track action at Silverstone.

Nonetheless the next of his subsequent eight penalty points will not be removed until mid-November.

Norris picked up three for a yellow flag infringement in Turkey last year, three for a red flag violation in Azerbaijan last month, and two for his incident with Sergio Perez on Sunday.

Perez will also be on eight points for the next rounds, having picked up four in Austria for his two clashes with Charles Leclerc, with the next one not due to be removed until mid-August.

George Russell will have three of his removed at the start of August while one of Raikkonen’s will be removed in a couple of weeks.

However Vettel and Latifi, who picked up three for the yellow flag violation on Sunday, will have their current tally on record until the 2022 season.

World Champion Lewis Hamilton finished the Austria weekend on six points but today (July 5) loses the four that he accrued at last year’s season-opening round at the venue.

Haas rookie Nikita Mazepin and Alfa Romeo’s Antonio Giovinazzi are both up to five respectively, while Aston Martin’s Lance Stroll and AlphaTauri newcomer Yuki Tsunoda are on four.

Charles Leclerc (three), Valtteri Bottas (two) and Pierre Gasly, Daniel Ricciardo, Carlos Sainz and Esteban Ocon (one) are towards the healthier end of the table.