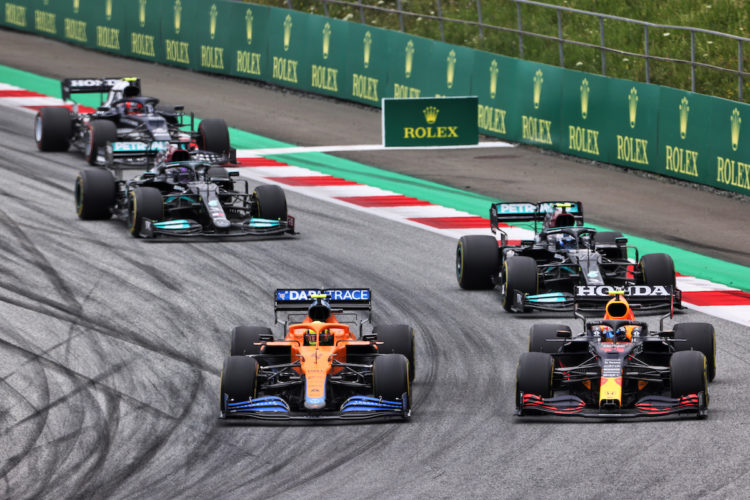 Sergio Perez believes Lando Norris was wrong to push him wide as they battled for position early on at the Austrian Grand Prix.

At an early safety car restart, the duo were fighting for second place, with Perez attempting to pass around the outside at Turn 4.

However, Perez was forced off the circuit and lost a handful of positions. The stewards deemed Norris’ driving to be illegal, and handed him a five-second penalty.

Norris stated that Perez’s overtake attempt was “a bit stupid”, while Perez claims that the McLaren driver’s defence was too aggressive.

“The first incident with Lando, he got away with it, because he didn’t get any damage but, obviously next time it can be very different,” Perez said.

“It was only Lap 1, I felt that I was a little bit ahead, and he just run me off the circuit, which wasn’t fair enough in racing.”

It wasn’t the last moment of controversy that Perez was involved in during the 71 laps of racing.

Later in the grand prix, Perez was battling with Ferrari’s Charles Leclerc, with the latter attempting to pass the Red Bull driver around the outside at Turn 4.

Leclerc was pushed wide into the gravel, and met a similar fate a handful of laps later while trying to get ahead of Perez at Turn 6.

“With Charles, I’m very sorry, because that’s not the way I like to race, I’m not the kind of driver that races that way, but I was on very dirty air, on very hot tyres, very hot brakes,” Perez said.

“We were just trying to brake as late as possible – I haven’t seen the incidents, but I’m very sorry if I affected his race, because Charles is a driver that fights hard, but always on the limit, so I am the same and I’m not happy with myself for that. I just move on.

“I just told him what had happened from my side, but obviously it’s not enough, it’s not nice when you have this kind of issues, but he knows that I’m not that type of driver and I’m not comfortable with myself.”