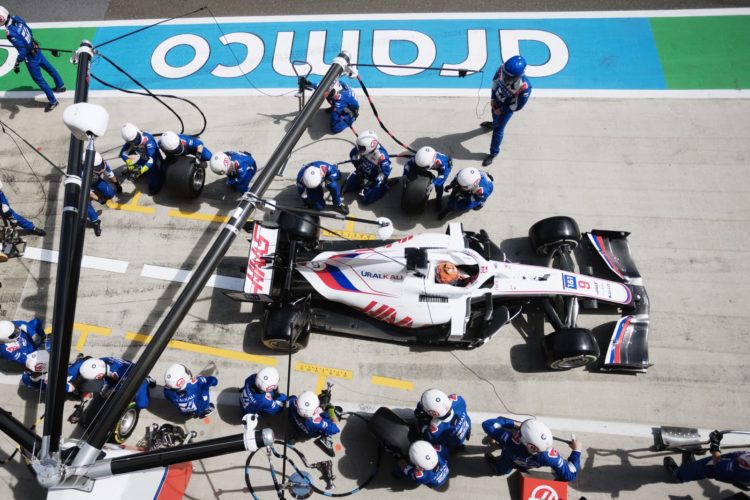 Haas Formula 1 Team Principal Guenther Steiner has expanded on comments made by Nikita Mazepin after the Styrian Grand Prix relating to his VF-21 chassis.

A rueful Mazepin commented after Sunday’s race that he was struggling with a “very heavy car” compared to team-mate Mick Schumacher and “just a carrot to be caught.”

Speaking ahead of this weekend’s Austrian Grand Prix, Steiner outlined that “there is a small weight difference depending on the weight distribution” but played down the significance.

“I mean, heavy is never good, but it is not like 20kg heavy, or even 10kg heavy, it is nothing like this.

“The chassis, they are a year old, they’ve raced for a year, and normally every year you make a new one, and for sure the chassis never get lighter over the year.

“Obviously a heavier car never makes you faster, really, you know. I stated the obvious here. But how much… as I said I don’t want to go to the exact amount of weight, for sure it does something, physics are physics you know, we will not change them, so it slows him down, but it’s not a lot.”

Mazepin suggested on Sunday that he was not expecting a remedy for “six to seven races” but Steiner outlined a new chassis is set to be introduced in Belgium, which is three events away.

Mazepin’s comments came after a grand prix in which he finished adrift of Schumacher, with both running offset Medium/Hard tyre strategies, having initially jumped his team-mate on the opening lap.

Steiner outlined that the situation with blue flags was to blame for Mazepin’s relative slide down the order as opposed to any weight issue.

“Last race it wasn’t that, I think last race he got caught by the cars which were lapping him, we are the lapped cars obviously, and that makes you a sitting duck,” he outlined.

“Once you let three cars by your tyres go where you don’t want them to be and you never get them back [in the window].

“I don’t think that has anything to do with the chassis [differences], and that [strategy] was done because again, in the beginning, we decided to give him an earlier pit stop to keep him out of the blue flags. So I wouldn’t put that one down to the weight difference.”