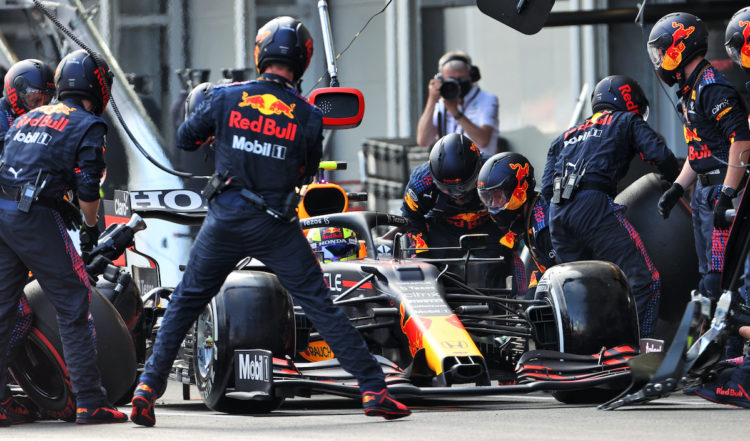 Red Bull has accused Mercedes of “stealing” their pit stop advantage, after the FIA introduced new rules aimed at slowing them down.

On Thursday the FIA sent a technical directive to all the teams with guidelines on minimum times between stages of a pitstop to account for human reaction times, as there was a belief that teams have become dependent on sensors.

It insists no particular team has been targeted, but with Red Bull consistently the quickest team in the pitlane, it feels as though it’s aimed at slowing them down.

“Mercedes pushed it because they wanted to steal our advantage during pit stops,” commented Red Bull’s Helmut Marko.

“We lose up to four tenths. Seven years of work and training have gone into the consistency and speed of our pit stops.”

Mercedes’ Toto Wolff confirmed that his team approached the FIA over pit stops, but insists its approach was to query its own system, rather than a competitors – though teams will often do this as a way of indirectly forcing the FIA’s hand.

“We enquired with the FIA on a safety mechanism which is related to a system that we are using and whether that could be optimised. That happened, I would say, three or four weeks ago and was a technology question,” confirmed Wolff.

“Did that trigger anything else? Maybe, I don’t know, but this is the question we’ve asked.”

Red Bull team boss Christian Horner admitted to confusion over the change and he too suspects it came from a rival team.

“The technical directive is certainly very wordy and you always have to question whether it’s a question of regulation but I suppose we have been very competitive, we’ve got the world record on pit stops.

“We’ve had the majority of the fastest stops, and it’s not by accident.

“I find it a little disappointing because it’s the duty of the competitor to make sure that the car is safe. The penalty for a wheel not being fixed is that you have to stop the car immediately, so it’s a brutal punishment if you haven’t got all four wheels securely and safely fastened.

“So what the technical directive is trying to achieve, I’m not quite sure. I think there’s an awful lot of complexity to it.

“Of course when you are in a competitive situation, if you can’t be beaten, then the most obvious thing is for your competitors to try and slow you down. And that’s obviously what’s happening here.”