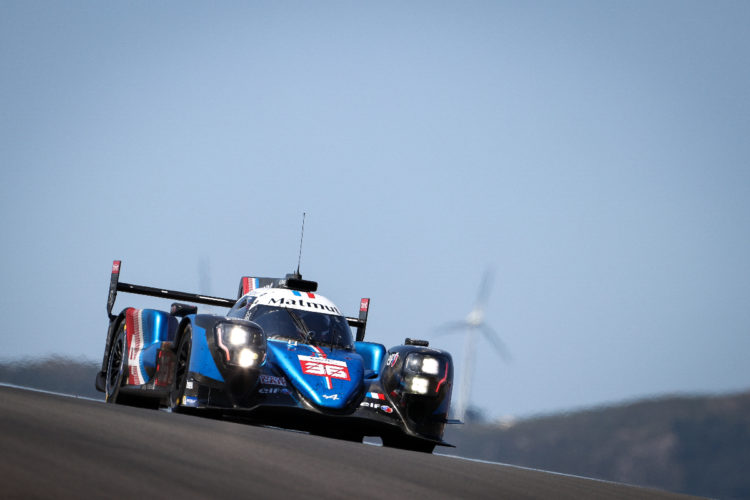 Nicolas Lapierre has called for changes to the Hypercar fuel allocation following the Eight Hours of Portimao, where Alpine finished over a minute behind as a result of vastly different stint lenghts between the French team and rivals Toyota.

The #36 Alpine A480-Gibson, driven by Lapierre, Andre Negrao and Matthieu Vaxiviere, started the race from pole position and led for the first half, but were eventually pushed back to third as a result of Toyota’s far superior stint lenghts and fuel economy.

The Gibson-powered, ORECA-built grandfathered LMP1 car averaged stint lenghts of 31 laps throughout the rivals, which fell far short of Toyota’s, which would often see the pair of GR010 Hybrids go as much as seven laps longer on a tank of fuel.

The issue at the heart of this disparity lies with the fuel allowance that both teams have been allocated as a result of the Hypercar Balance of Performance.

The allocated amount of fuel that has been given to Alpine by the Automobile Club de l’Ouest, which was designed for the car to be able to complete twelve-lap stint at Le Mans, can not physically fit inside the car’s fuel tank.

Therefore, the French squad is at a significant disadvantage to Toyota, which was on display during the second round of the FIA World Endurance Championship at Portimao.

Speaking to MotorsportWeek.com after the race had finished, the French driver asked for changes to be made to the regulations that would allow Alpine to better compete against Toyota, as he said the team were ‘screwed’ with their current allocation.

“We did a good race, we had good pace on track,” he said. “This race was better than Spa, but in the end we were screwed with the range we had. We had to stop two times more than Toyota, which is ridiculous right now, we are just participating, you know.

“We have no chance to do anything, so they need work out and find a solution, because it is really not funny for us, and I don’t think it is nice for spectators, as well.

“Hopefully things will change, because already in Spa, we did a very good race and Toyota made a lot of mistakes, but in the end we still finished behind.

“This race, we had a better race than them, the safety car was perfect for us, but in the end they are eight, nine laps longer onthe stints, so there is absolutely no chance. We are speaking about a 25 percent difference. Right now, no chance, so I hope things will change for the next race.”

The French squad was able to take the fight back to Toyota briefly after a safety car was called in the sixth hour of the race, after which a quick Lapierre challenged both Kazuki Nakajima and Kamui Kobayashi following the restart, before eventually dropping back again.

A second safety car was very nearly called when the High Class Racing ORECA of Anders Fjordbach came to a halt on track, which would have put the Alpine straight back into the fight for victory, but race control opted for a full course yellow instead, which meant that the gaps remained unchanged.

“But in the end counting on two safety cars to win a race, it’s really poor,” he said. “Already by the first one, we were one minute twenty [seconds] behind and we gained one minute twenty, which was amazing.

“And then after this, we knew the Toyota number 8 could go to the end, because they did 39 laps, and we can do 31 maximum, so even with another safety car it would have been difficult, to be honest.”

Lapierre said that the situation is makes it difficult for the Alpine squad to motivate itself for races, knowing that it is going in with an extremely slim chance of victory.

“We are doing our best, and we are pushing and the team has always been doing this and I have a lot of respect for them, but for sure, it’s very frustrating when things are not fair, it’s the worst that you can have.

‘I think in terms of BOP on track, they did pretty good, like in Spa the Toyota was a bit faster on a faster track.

“Here, we were faster than them because it’s more tricky and I think a bit more difficult with them, with the weight they are carrying. So with this, they did a very good job. But on the range, the fuel range, right now it’s a problem.”

The ACO’s Director of Competition, Thierry Bouvet, indicated earlier in the week that the ACO would be unable to address the issue, as fuel allocations were determined months ago and it was unwilling to reduce the stint lenghts for the Hypercar category.

Despite that, Lapierre expressed hope that a situation would be able to be found.

“This is the technical aspect, it’s a difficult situation because the Hypercar rules were designed to have this quantity of fuel and right now we have an old car, where we can not put all this fuel [in].

“So it’s very tricky, I’m not saying it’s an easy situation, but we need to find a solution somehow to make it more fair.”