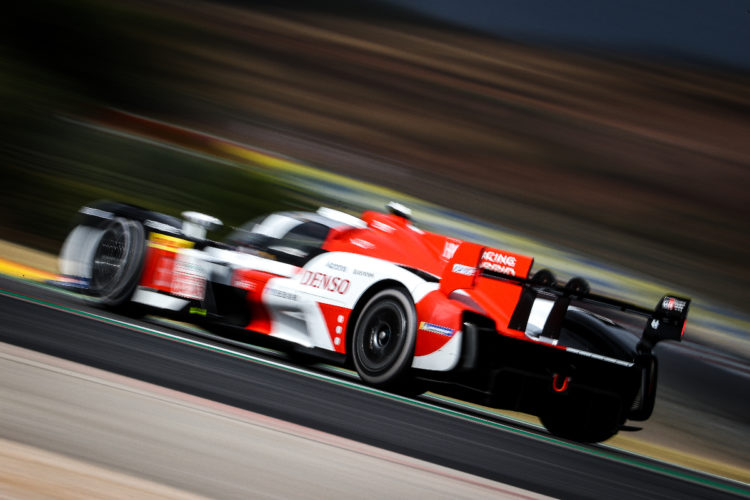 Toyota Gazoo Racing leads the Eight Hours of Portimao with two hours remaining, with the fuel advantage for the hybrid Hypercar allowing them to take the race lead away from Alpine.

After closing in on Alpine for several hours, the pendulum finally swung in Toyota’s favour shortly after the halfway point of the race, allowing both cars to surpass the ORECA-built Alpine on the pitstop cycle.

The gaps between the three cars were then bunched back up again as the result of the race’s first safety car. A very quick Nicolas Lapierre then took the fight to Toyota in the #36 Alpine A480-Gibson, before it had to pit again and dropped back to third.

Stoffel Vandoorne seized the lead in LMP2 prior to the six-hour mark due to some inspired driving for JOTA. The Belgian first moved from third to second after a hefty battle with Team WRT’s Charles Milesi.

Then, after the safety car, the ex-F1 driver managed to move the #28 ORECA 07-Gibson into the lead in class by surpassing the #22 United Autosports ORECA 07-Gibson of Phil Hanson during a round of pitstops.

Vandoorne now leads the class, ahead of Hanson in second place and third held by Milesi, although facing increased pressure from the sister JOTA of Anthony Davidson in fourth place.

Porsche is regained momentum in GTE Pro, with the #92 Porsche 911 RSR-19 of Kevin Estre closing in on the pair of leading Ferraris.

The #51 Ferrari 488 GTE Evo, driven by James Calado, still leads ahead of Daniel Serra in the #52 sister car, but Estre is closing in.

In GTE Am, Cetilar Racing leads with Antonio Fuoco in the #47 Ferrari 488 GTE Evo. The Italian moved to the front as a result of some drama in the privateer class moments for the safety car.

Paul Dalla Lana was leading in the #98 Aston Martin Vantage AMR, but spun coming out of turn 8. His subsequent stop handed the lead to Kessel Racing’s Scott Andrews, but the Australian had to pit for a splash of fuel under the safety car.

That then allowed Fuoco to filter to the front, but facing heavy pressure from the #56 Team Project 1 Porsche 911 RSR-19 in the hands of Matteo Cairoli.