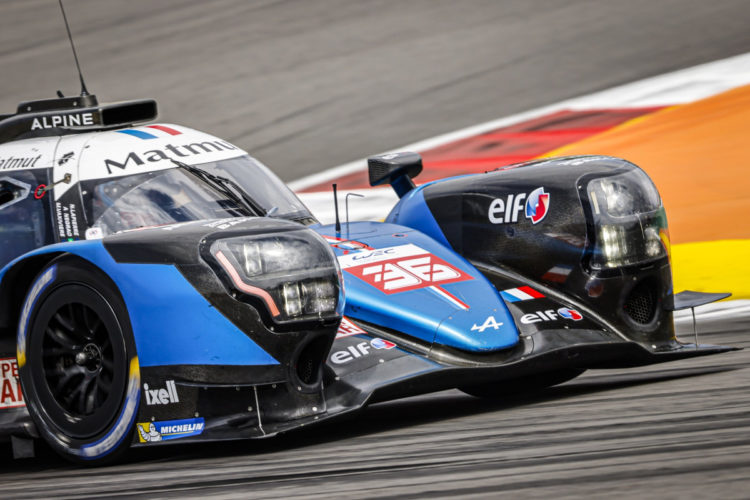 Alpine Elf Matmut holds the lead of the Eight Hours of Portimaoat the halfway mark of the race, although the Toyotas are rapidly closing in.

Alpine had led the race from the start, but the Toyotas are steadily reeling in the French team in as the two hybrid-powered Hypercars were able to go significantly longer on a stint.

Matthieu Vaxiviere currently leads in the #36 Alpine A480-Gibson, ahead of Kamui Kobayashi in the #7 Toyota GR010 Hybrid, with team-mate Kazuki Nakajima third in the #8 Toyota.

Glickenhaus has returned to the circuit after extensive repairs following earlier contact with a pair of GTE Am cars, but the #709 007 LMH is running 46 laps down on the leading Toyotas.

JOTA has made its way back to the front of the LMP2 standings after contact in the opening lap and sits in one-two, although it is on pitstop cycle.

Sean Gelael’s #28 ORECA 07-Gibson was leading the #38 sister car of Antonio Felix da Costa at the halfway point, although the effective leader in class is currently the #22 ORECA 07-Gibson from United Autosports, driven by Paul di Resta.

In GTE Pro, Ferrari has moved into a one-two position ahead of Porsche. The #92 Porsche 911 RSR-19 had led the race from the start, but previously lost the lead to the #51 Ferrari 488 GTE Evo, currently leading in the hands of Alessandro Pier Guidi.

Pier Guidi now leads a Ferrari one-two, as the #52 sister car in the hands of Miguel Molina, who has moved into second place.

In GTE AM, the #98 NorthWest AMR Aston Martin Vantage AMR of Augusto Farfus leads the class. Farfus was able to seize the lead when the previous leader, the #54 AF Corse Ferrari 488 GTE Evo, came in to pit as Giancarlo Fisichella handed over to Thomas Flohr.

Flohr dropped to third place behind Farfus and the second-placed #47 Cetilar Racing Ferrari 488 GTE Evo in the hands of Giorgio Sernagiotto.

Two cars in GTE Am have retired from the race: the #777 D’Station Racing Aston Martin Vantage AMR and #77 Dempsey-Proton Racing Porsche 911 RSR-19. Both cars were withdrawn as a result of damage brought on with the collision with the Glickenhaus Hypercar earlier in the race.