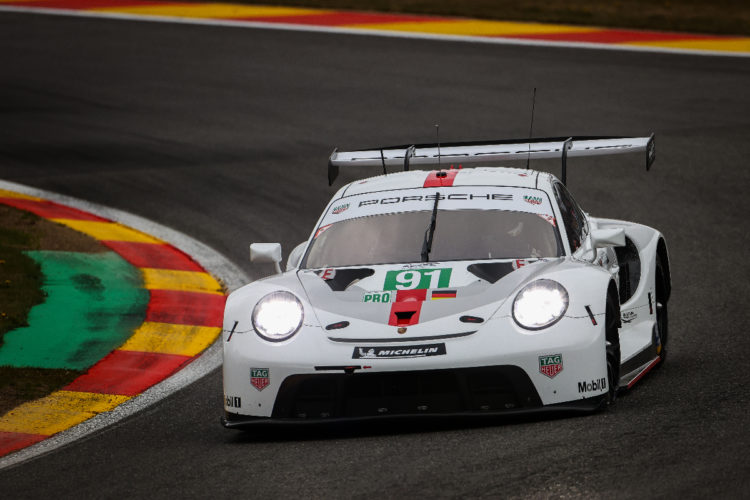 Richard Lietz says that his goal for the 8 Hours of Portimao is to score as many points as possible to make up for a ‘mediocre’ season opener at Spa-Francorchamps.

Lietz and Gianmaria Bruni finished last in the GTE Pro category at Spa after a difficult race that included a puncture as a result of contact with one of the Toyota Hypercars.

The pair currently sits fourth and last in the GTE Pro standings, behind team-mates Kevin Estre and Neel Jani and both Ferraris.

For Lietz, the objective therefore is simple: maximum points in order to make up the ground lost in the opening round.

“After achieving a mediocre result with our number 91 car at the season-opener in Spa-Francorchamps, we’re now determined to earn maximum points,” he said. “

The track promises a lot of action and poses special challenges to teams and drivers. The durability of the tyres over two stints will be particularly tricky, but I think we’re well prepared.”

The two full-season crews from the German manufacturer are joined at Portimao by the two respective drivers for the 24 Hours of Le Mans, as opposed to Ferrari, which has not opted to bring in third drivers for the eight-hour enduro.

Lietz and Bruni are joined by Frenchman Frederic Makowiecki, who has become the duo’s regular third driver at Le Mans in recent years. Estre and Jani are meanwhile joined by Michael Christensen.

Makowiecki says he is happy that he was given the chance to race at Portimao, as it allows him to better prepare for Le Mans.

“It’s great that the WEC has included an eight-hour race on its calendar in the lead-up to the Le Mans highlight,” he said.

“This allows me to familiarise myself again with the Porsche 911 RSR and take in the team processes. The same applies to Michael in the sister car.

“I think that our car should be well suited to the special features of this racetrack. I’m heading to the race weekend feeling very excited and I’m thrilled that I can finally drive the fast GTE racer for Porsche again.”