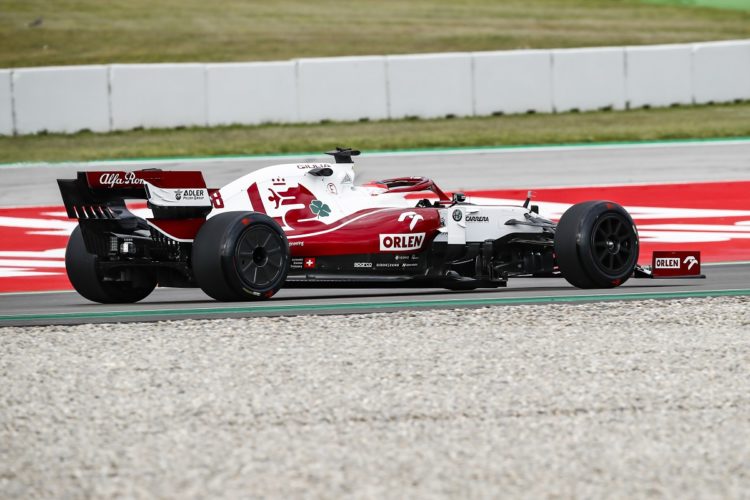 Red Bull and Alfa Romeo continued Pirelli’s 18-inch tyre testing programme in Barcelona on Tuesday, with the latter showcasing the wheel covers that will be introduced next year.

The covers are being integrated into the revamped cars under a technical regulations overhaul in 2022, which is aiming to increase competition at the front of the field as well as allowing closer racing.

Wheel covers were last used in Formula 1 in 2009, before they were banned for the 2010 campaign.

The 18-inch tyres that were tested will also be used for the first-time next year, having been exercised in Formula 2 since 2020.

Robert Kubica was behind the wheel for Alfa Romeo during Tuesday’s Barcelona test, while Red Bull’s mule car was driven by Alexander Albon.

It marked Pirelli’s ninth test day with the 18-inch tyre this year, as it already tested in Jerez, Bahrain and Imola.

Across the day, 277 laps were logged for the Italian tyre manufacturer – Albon tallied 150 while Kubica set 127 laps across the morning and afternoon.

Pirelli will continue to test in Barcelona on Wednesday as former AlphaTauri driver Daniil Kvyat will handle driving duties for Alpine under his new reserve driver role with the team, while Kubica and Albon will carry out another day of testing.

Following the two days of running in Barcelona, Pirelli will conduct another test later this month at Paul Ricard with Mercedes, which is scheduled to be the second wet tyre test this year.