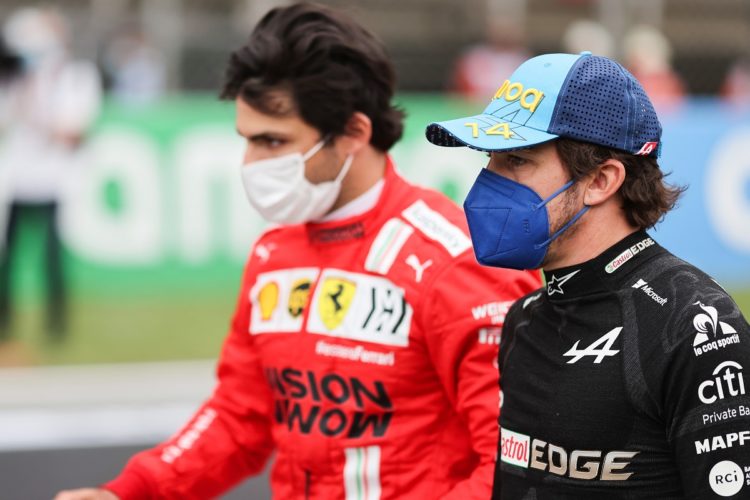 At the Portuguese Grand Prix, there were instances to cheer about for Spanish drivers Carlos Sainz and Fernando Alonso. Sainz ended qualifying fifth, while Alonso’s late-race surge saw him bag eighth place, his best result since returning to F1 this year.

With their home Spanish Grand Prix next on the calendar, spirits were high as both sought to impress at their local event, albeit in front of largely empty grandstands. However, it would prove to be a far from straightforward weekend for the duo.

Both Sainz and Alonso were beaten by their team-mates in qualifying – Sainz lined up in sixth, while Alonso occupied 10th for the start of the race.

A difficult opening sequence of corners for Sainz saw the Ferrari driver drop behind Daniel Ricciardo and Sergio Perez. In the pit stop phase roughly one-third into the race, Sainz moved ahead of Esteban Ocon for seventh, where he would remain for the remainder of the grand prix.

With overtaking proving to be difficult around the Barcelona circuit, Sainz’s result was likely hampered by his poor run to Turn 1, as team-mate Charles Leclerc starred to a fourth place drive.

“What is clear is that I still need to get a bit better and a bit more confident with the start system and the way we operate to get that perfect launch and the perfect first 100 metres,” Sainz said.

“Although today, I don’t think that was the main limitation, the main limitation of it was the positioning, getting in and out of the slipstream and then being boxed in behind Ocon going into Turn 1 and losing quite a bit of positions to the cars around the outside.

“It’s a combination of factors to get that perfect result like Charles did. You need to put the weekend completely together, and it comes to a good qualifying, to make a good lap in Q3 to start further ahead, and then it wouldn’t have been an issue, and then making the start.

“This is what I was particularly good at McLaren, putting the whole weekend together, and this is what I need to keep improving as the races go on with this team to keep performing at the highest possible level.”

For Alonso, in a bid to score points on a different strategy, he remained out on the track on a set of Medium tyres with a one-stop strategy in mind, while his rivals around him pitted for a second time, switching to the Softs.

Alpine’s gamble failed to pay off, and the two-time world champion was devoured in the closing laps, leaving him to take zero points from his home race.

“It was risky but in a way we were P11 in lap 20-something when we start to stop everybody, so we had to respond to Gasly at the stop in lap 23 or 24,” Alonso said.

“Then we were P11 and I think the best way to score that 10th position was to risk, and yeah we took a lot of risk, it didn’t work today as we finished the tyres at the end, but if we don’t do that and stay out, probably Gasly will overtake us, probably Vettel will overtake us, then you are P12 and P13 for the remainder of the race. It was difficult.

“Let’s wait a couple of grand prix but I think we can be the fifth team, behind Ferrari and McLaren, and this is good news because in the first two races it was more difficult to be in the Q3.”