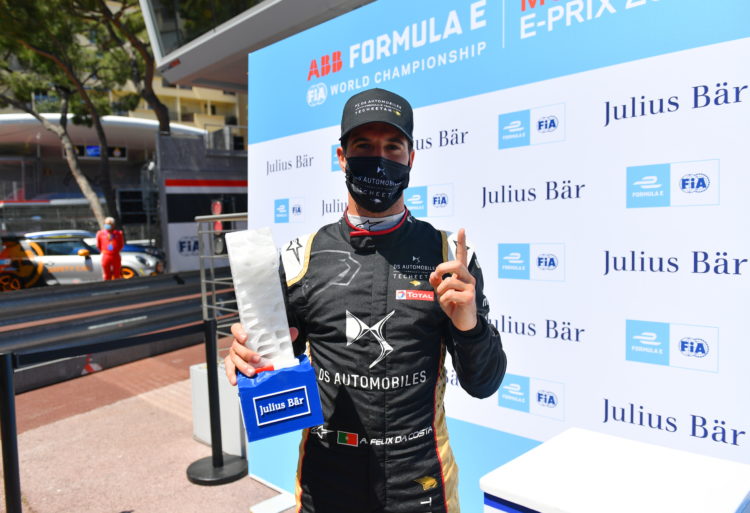 The Portuguese driver booked his place in Super Pole after putting his 250kW lap in early during Group 3, alongside team-mate Jean-Eric Vergne, Nissan e.dams’ Oliver Rowland and Maximillian Guenther for BMW i Andretti.

Da Costa clocked in a 1m 31.317s to go quickest in Super Pole. However, it was close to call with the top four split by six-hundredths of a second.

Frijns narrowly missed out on pole by 0.012s and starts second, while Evans, who had set the pace in FP2, threw his car around the Circuit de Monaco to start third.

Vergne starts in fourth ahead of Guenther, as a frustrating session followed for Rowland, whose Super Pole time was deleted for crossing the pit lane exit after the red light.

The 28-year-old was visibly annoyed by the lack of time given to him to get back into his car following the delayed ending to Group Qualifying and will start sixth.

Nick Cassidy was forced to settle for seventh, with the rookie narrowly missing on the Super Pole shootout by 0.002s. The second Envision lines up ahead of Porsche’s Pascal Wehrlein and podium finisher last time out Alex Lynn.

Norman Nato qualified in 10th but has been awarded a two-place grid penalty for falling to respect the double yellow flag in FP1 and colliding with Sergio Sette Camara at Turn 18. He will start from 12th place.

Qualifying outside the top ten was Rene Rast. The Audi driver could only manage the 11th fastest time and will line up ahead of Mahindra’s Alexander Sims.

Sebastien Buemi narrowly edged out Round 6 race winner Jake Dennis, after a delayed start to his lap following a red flag.

It was disappointing session for Sam Bird. The Jaguar driver had set the pace in FP1 and was expected to be a player in Super Pole but lines up in 16th place.

Yet Championship leaders Mercedes EQ seemed to have come off worse during the session. Stoffel Vandoorne starts from 15th, whilst his team-mate Nyck de Vries languishes at the back of the grid in 23rd place, nearly 1.5s slower than Frijns’ leading Group Qualifying time.

A nightmare for the Dutchman saw him clip a switch and drop out of 250kW power mode heading into the second sector, before locking up into the harbourfront chicane.

Sette Camara rounds out the grid after failing to set a time. The Dragon/Penske driver’s back end spun out heading into Turn 19 and saw him hit the wall and triggering a red flag.