How Ilott fared during F1 practice debut in Portugal 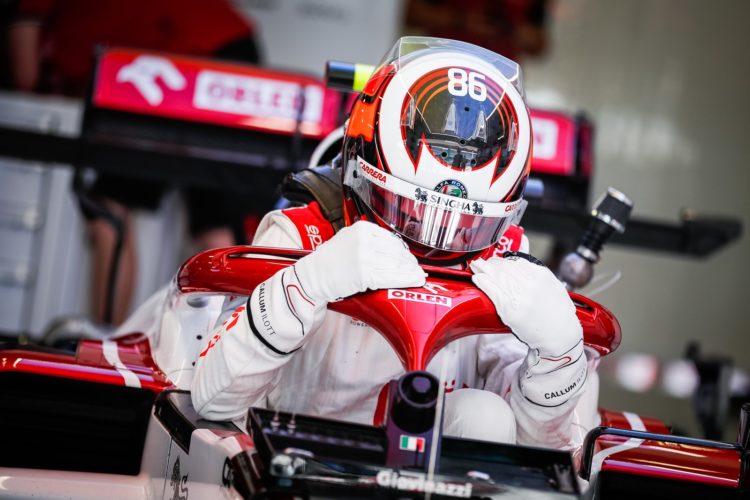 Callum Ilott became the latest driver to make an appearance during a Formula 1 race weekend as he got behind the wheel of Alfa Romeo’s C41 at Portimao.

Ilott was confirmed as Alfa Romeo’s back-up reserve driver earlier in the week and Friday’s opening session presented the Briton with his first opportunity to sample the squad’s C41.

Ilott had previously linked up with Alfa Romeo at the post-race Barcelona test in May 2019 – which was truncated after a heavy unseen crash – and in Abu Dhabi last December, a few days after sealing the runner-up position in the Formula 2 championship.

He has also carried out private testing with backers Ferrari at its Fiorano facility and had originally been due to run for Haas at the Nurburgring last October before persistent rain and heavy fog caused the entire day’s track activity to be abandoned.

The reduction in practice for this year means FP1 stand-ins only have 60 minutes rather than the previous 90 and Ilott amassed 21 laps in the C41 that is usually driven by Antonio Giovinazzi.

Ilott’s best time left him 17th on the leaderboard, two spots behind team-mate Kimi Raikkonen, with a time gap of 0.425s.

“It was interesting to experience it,” Ilott said. “But once I was up to speed with the tyres and getting used to it, I think I finished the run on the Hards, one-tenth off Kimi, which is not too bad at the time.

“Then we went to the Softs and I completely got caught out at the beginning by how much grip [there is] and also getting the tyres in. So I struggled a bit then but then we came in, rebalanced and then I think with the tyre mileage I had, I didn’t do a bad time.

“Overall, building consistently, was very happy with the session, got through all the run plan that we needed to and discovered the limitations we have as a team and as a driver as well. Lots learned from my side and lots learned from the team.”

It was Ilott’s first experience of the C41 and he added that getting used to the different nuances of a new car led to a couple of small setbacks.

“Towards the end as well I got a bit more comfortable but obviously having the test last week in the Ferrari, I’m used to some different [switch] positions,” he said. “I need to get used to it again. Within the session obviously I would love to do more but you only get an hour so you’ve got to make the most of it. First run was OK, tried to get into a rhythm, needed to make a few changes.”

Ilott expressed glee at the “unbelievable” one-lap speed of this year’s Formula 1 cars and outlined that switching between machinery is an aspect which he will have to get used to in 2021.

Further FP1s with Alfa Romeo are in the pipeline, with Ilott’s next run scheduled for June’s French Grand Prix, as are private test days in old-spec Ferrari machinery, while he also has a GT programme with the Italian marque.

“I’m racing the GT side of things as well this year so that’s obviously quite a different thing to what I’m used to, so trying to change and adapt is something I’m going to have to get used to a bit, especially if, hopefully, I do some more this year,” he said.

“It’s still an incredible car to drive. Obviously the FP1s are a bit shorter this year, but one hour is a good time to get yourself up to speed. At tracks like this, it’s challenging as well. Hopefully we can get some more if I ask nicely, we’ll see.”