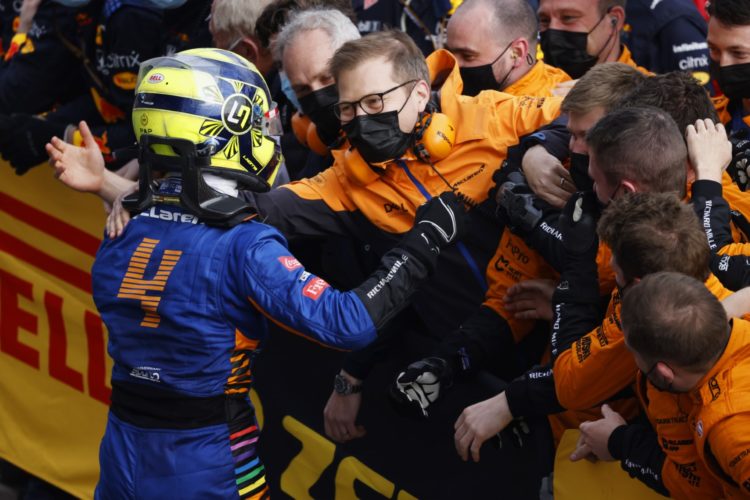 Lando Norris has made the next step, according to his McLaren Formula 1 team boss, following his showings at the opening rounds, and now has to maintain his current trajectory.

Norris holds third spot in the championship after the first two rounds of the campaign, with one podium, having finished fourth in Bahrain prior to his third at Imola.

It puts him in an almost identical position to the start of the 2020 season, when he claimed a podium and a fifth from the first two rounds, both of which were held in Austria, to hold third in the standings.

After that strong start Norris ultimately did not mount the podium again and classified ninth overall – but McLaren chief Andreas Seidl feels the youngster has made strides since last season.

“Results like the ones he had in Bahrain and [at Imola] are a great confirmation for him that he is heading in the right direction,” explained Seidl.

“The most obvious for me is the lap times he is putting in consistently. That is the most important thing for me as I’ve said many times, because if these lap times do not come I cannot fix it.

“In the end these lap times are also a result of the hard work he has put in together with his team and our engineering team over the winter in order to learn from his second season in Formula 1, in order to digest it in the right way and make the right conclusions and come back this year clearly being in the position to make the next step.”

Seidl added that Norris “is flying at the moment” and that the ambition now has to be to build on his strong start to 2021.

“I can clearly see that also in terms of personality and character that he made the next step, which is also normal for these young guys,” he said.

“It is also what you would expect from these guys because they need to make the steps in the early years if they want to become top drivers.

“I’m obviously very, very happy from what I’ve seen so far from Lando this year. It is simply important now to pull this off like the first two races, weekend by weekend, which is a big challenge for a Formula 1 driver because a season of 23 races is very, very intense.

“Also, the sun is not always shining, [you] will not always have these great moments that we could experience again these two weekends.

“Then it is simply important to stay focused and keep the positivity up, and energy levels up, and pull it off again in the next session when you jump in the car.”