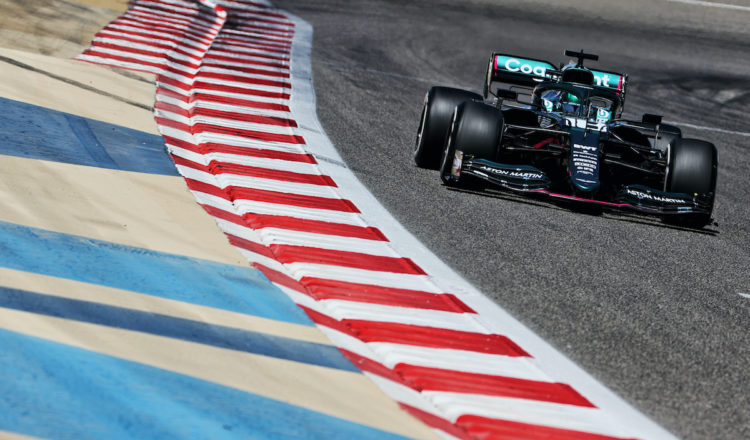 For the first race in Bahrain, as expected, the main aerodynamic changes concerned the floor, an element which the new 2021 aerodynamic rules tried to limit its contribution to rear downforce.

Among the grid it’s the Aston Martin which stands out. The AMR21 for the first race of the season made its debut in free practice with a new floor, very complex in its layout and interesting to analyse.

The new floor, already the third iteration we’ve seen on the AMR21; the first at the shakedown and the second version at pre-season testing, is characterised by the massive presence of vortex generators and flow deviators along the lateral edge, where the diagonal cut begins at 1800mm from the front wheel axle.

Aston Martin is among those teams that have chosen to reduce the size of the floor, not diagonally, but rather almost horizontally, forming a of stepped edge. This is probably to try to keep the edge of the floor more or less parallel to the bodywork, and manage the vortexes of air in a more similar way to last year.

It’s clear that in the area of ​​the step (about halfway down) there is an increase in aerodynamic elements to direct the vortexes outside the car, to reduce the aerodynamic drag of the tyre. The vortex generators go from five to six elements, with the addition of three other aerodynamic devices just behind.

But certainly the most interesting area is directly ahead of the rear wheel, in the terminal part of the flat floor. In this area in the old specification (right) there were a series of vertical deviators in front of the tyre, which in the new specification are connected by a horizontal element that acts as a second floor. This element also extends beyond the diverters, falling into the base of the arched bottom, forming another flow conveyor. It is clear that Andrew Green continues to be inspired by Mercedes which has a similar concept.

In fact, as we see in the direct comparison, Mercedes was the only team up to that moment to have a bridge element above the switches in front of the wheel.

Aston Martin’s solution is even more extreme than Mercedes.

Again, present only on Mercedes and Aston Martin is the wave floor. The sinuous shape, as if it were a kind of wave, has the aim of compensating for the cut of the surface of the floor by collecting more airflow from points where the edge is lower. The Mercedes solution is slightly more refined, and present in an area slightly further back than that of the Aston.

Aston Martin is trying to recover lost downforce with the bottom cuts, even if, according to Mario Isola, the teams have recovered almost all the downforce lost with the new regulations. We will certainly see further changes in this area over the course of the season. It is not yet clear which solution will be the progenitor to be copied by all the teams.