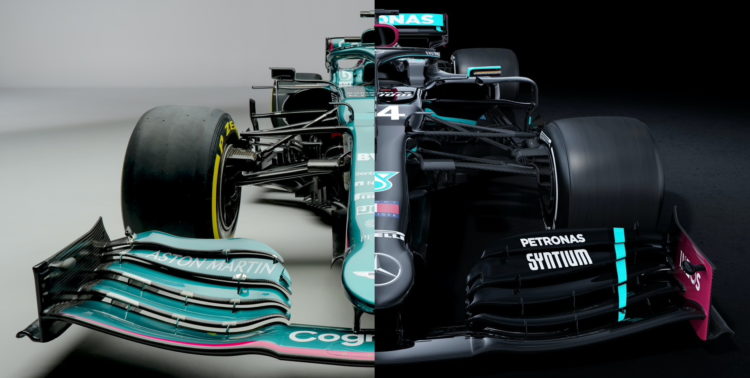 Aston Martin has finally presented its first Formula 1 car in 60 years. The AMR21 was shown off in its version of ‘British Racing Green’ with flashes of dark pink in a nod to sponsor BWT, which remains on the car, albeit in a very toned down deal.

From a technical point of view, the AMR21 does not seem to fear prying eyes, having published several photos of the new car from which it is possible to draw ideas for analysis and reflection on what the car will look like in Bahrain next week.

After the ‘copygate’ saga of last year, the risk of running into the same controversy again during the 2021 season can’t be overlooked entirely given the Mercedes once again features heavily in the design of the AMR21.

Despite the controversies of 2020, and the consequent penalty in the constructors’ standings (docked 15 points and fined €400,000), it was the same 2020-2021 regulations with their freezes that ensured that the new AMR21 has taken up various technical concepts expressed on the Mercedes W11.

With the RP20, Aston Martin already has a ‘copy’ of the 2019 Mercedes W10 to work from and its technical chief, Andrew Green, never hid the fact Aston Martin would continue a similar development direction with its first F1 car. He openly discussed the fact their car would continue to take inspiration from the W11.

Furthermore Aston Martin has been able to directly implement the rear suspension of the Mercedes W11 without spending any tokens, due to the exemption granted by the FIA to teams such as AlphaTauri, Aston Martin, and Haas, which allows them to adopt homologated parts – this won’t happen in 2022 when new technical rules are introduced.

But it’s not all ‘copy, copy, copy’ for Aston Martin which also has its own independent solutions. It has experimented with home-made aerodynamic solutions on the AMR21. Among these are the new floor and diffuser, because of it doesn’t have a concept to copy.

Front of the AMR21

The front of the AMR21 has several aerodynamic refinements that differ (albeit slightly) from the solutions present on the 2020 Mercedes W11, and which mostly concern a development of the old Racing Point RP20.

The nose, which continues to use the same impact structure homologated last season, remains fairly faithful to the aerodynamic lines of the RP20, but with refinements especially in the terminal area of ​​the cape, with a more marked out-wash effect.

The front wing seems to follow an intermediate philosophy between in-wash and out-wash, and does not differ much from the RP20. In detail, the last flap at the top is shorter. However the final element drops more suddenly to accentuate the outwash effect (arrow), but with an upward curvature just before. The endplate has not undergone major changes compared to the old car.

The front suspension has not been particularly revised in the wishbones, and remains a double bracket with push rod scheme. The brake ducts (the subject of last year’s controversy, and which triggered the penalty) are a direct development of the RP20, modified in mid-2020 season which present the classic “inverted L” shape.

We already knew before the presentation that Aston Martin had communicated in December that it wanted to spend its two tokens on a new chassis with lower anti-intrusion cones.

Green was very good at navigating the new regulations to identify in which area to intervene on the former RP20, and to try to remain faithful to what was the Mercedes W11. The old RP20 still had the “old style” solution with the air intakes of the radiators under the anti-intrusion cone, just like Mercedes did in 2019.

Last year the Brackley team updated their car, adapting to the trend introduced by Ferrari and Red Bull between 2017 and 2018, moving the radiator ducts above the anti-intrusion cone, in order to have a larger channel for the air flow in the lower part of the sidepods.

However, the mandatory homologation and the consequent freezing of the chassis, would not have allowed Green’s team to upgrade to the new configuration without spending its development tokens.

The below photo shows the new side impact structure cone highlighted in yellow, which allows the sidepod intakes to be placed higher up and therefore creates a larger opening below to channel airflow to the floor and diffuser.

The homologation of the new survival cell does not concern the entire chassis, but only the part that goes from plane B-B to plane C-C. Homologating a new chassis entirely produced from scratch is not possible by regulation, as more than two tokens would be needed, therefore you can’t introduce a new nose concept at the same time, hence why Racing Point have stuck with the same.

The bargeboards are certainly the most independent aerodynamic part on the car, moving away from Mercedes, and are a simple development of the RP20’s.

In the image below we have indicated with arrows all the new elements compared to the old specification, and it is clear how the modification to the frame has resulted in the revision of the management of the air flow from the bargeboards.

The performance of the aerodynamic elements is really interesting, and it is an engineering masterpiece that includes a whole intricate forest of carbon flow conveyors and vortex generators, which prepare the flow that will go through the bodywork and rear end.

Aston Martin’s engine cover shares a similarity with the Mercedes W12 and it’s one that catches the eye in the form of an oval hump which is necessary due to the shape of the intercooler.

This shows how tightly the engineers have worked to wrap the bodywork around the engine components to deliver as much airflow as possible to the rear of the car.

The Aston Martin AMR21 is perhaps the first car to be unveiled that has some interesting solutions on its floor, unlike its rivals which have shown off very basic designs.

In the central and terminal area, it is possible to observe several vertical flow deviators, which have the task of moving the air flow as much as possible to the outside of the rear wheel, in order to reduce the tyre squirt phenomenon.

As anticipated at the beginning of the analysis, Aston Martin has chosen to use the rear suspension of the W11, with the convergence arm that adheres to the rear impact structure (and not to the gearbox) in order to maximise the efficiency of the diffuser.

Mercedes last year amazed with this solution, as it was able to exploit the mechanics in an extreme way for aerodynamic purposes.

Specifically, the rearward convergence arm recreates a sort of second diffuser by forming a channel for the air flow, right between the arm and the upper part of the extractor. The illustration highlights the layout of the W11 suspension, with the arm that adheres to the rear impact structure.