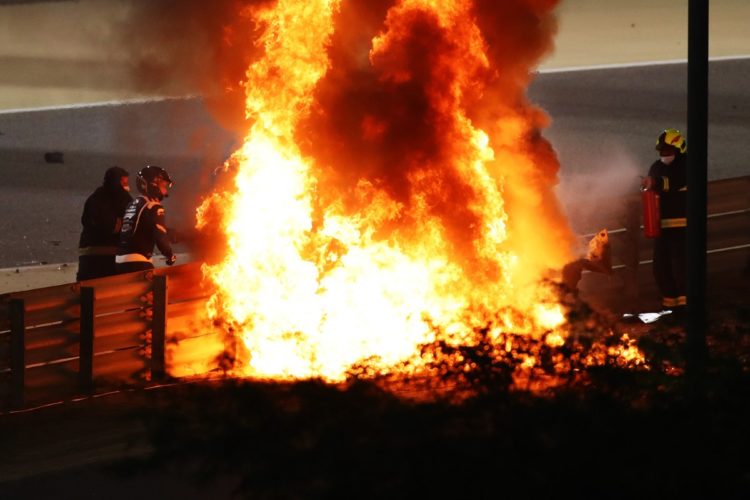 Grosjean escaped the horrifying shunt with burns after spending almost half a minute in the flames of his wrecked Haas VF-20, following his high-speed crash at the start of the race at the Bahrain International Circuit.

Grosjean had to sit out the final two rounds of the 2020 season due to his injuries but has since secured a new drive in IndyCar with Dale Coyne Racing, and has already returned to the cockpit during pre-season testing.

The FIA announced in the aftermath of the accident that it would launch an investigation and on Friday published its conclusions.

The investigation included interviews with those involved, analysis of the physical evidence and available video material, as well as examination of the car’s accident data recorder and Grosjean’s in-ear accelerometer.

The report, carried out by the FIA’s Safety Department, was peer-reviewed by the Serious Accident Study Group, led by FIA President Jean Todt.

The report concluded that Grosjean’s car was travelling at 241km/h when he “lost control exiting Turn 3, following contact with Daniil Kvyat, when attempting to pass from the left to right-hand side of the track.”

The contact lifted the rear of Grosjean’s car and placed it on an “out-of-control trajectory.”

It was noted that while the investigation focused on the Grosjean/Kvyat contact “several other cars had a circumstantial but non-consequential effect on the initiation of the accident sequence.”

It determined that Grosjean’s car impacted the triple guardrail barrier at 192km/h at an angle of 29 degrees, with an estimated yaw of 22 degrees to the direction of travel, resulting in a peak force equivalent to 67g.

A figure of 53g had previously been given in the immediate aftermath of the accident.

The FIA’s report accepted that there was a “failure of the middle rail of the barrier and significant deformation of the upper and lower rails.”

Grosjean’s VF-20 “suffered extensive damage during the impact, including separation of the power train assembly from the survival cell.”

The fuel tank inspection hatch on the left-hand side of the chassis was dislodged and as a result the engine fuel supply connection was torn from the fuel tank ‘safety bladder’.

It was deemed that both of these provided primary paths for fuel to escape from the fuel tank.

Fuel ignited during the final moments of barrier impact, starting from the rear of the survival cell, and progressed towards the cockpit as the fire grew.

The ERS battery suffered significant damage in the impact, while some parts of the ERS battery assembly remained with the power train, and other parts remained attached to the survival cell.

All of the driver safety equipment, including the helmet, HANS, safety harness, along with the survival cell, seat, headrest and Halo, performed according to their specifications.

It was noted that “the resting position of the survival cell, relative to the upper rail of the barrier, significantly restricted the path” for Grosjean to escape.

Grosjean’s left foot was initially trapped when the car stopped but he was able to free his foot by withdrawing it from his racing boot, after which he moved both the dislodged headrest and steering wheel to escape.

The report determined that Grosjean escaped from the car 27 seconds after impact.

The Medical Car arrived 11 seconds after the accident, a speed which the FIA partly attributed to “the fact a ‘short cut’ was taken to avoid Turn 1, demonstrating both local circuit knowledge and pre-planning.”

It detailed that Dr. Ian Roberts, Alan van der Merwe and a local doctor “provided immediate assistance with each performing a pre-determined role.

“Dr. Roberts went immediately to the scene of the incident and instructed a marshal to operate the dry powder extinguisher around the cockpit where he identified Romain as trying to make his egress,” the FIA confirmed.

“Van der Merwe retrieved a fire extinguisher from the rear of the Medical Car whilst the local doctor prepared the trauma bag.”

The investigation into Grosjean’s accident was one of 19 related to circuit racing undertaken by the FIA’s safety department in 2020.

The FIA has outlined that it has identified several areas in which it will strive to make safety-related improvements.

These include reviewing the design of safety fuel bladder installations in all single-seater categories, analysing power unit mounting and mount failure modes, and a review of regulations relating to fuel bladder connections and inspection hatches.

Additional load tests are set to be applied to the survival cell’s front geometry, while there will be reviews into existing regulations regarding rear view mirrors, the mounting of the steering column, and a review of the regulation and homologation requirements for headrest assembly.

It will also investigate improvements to the Heat Transfer Index on gloves, regulations on which had already been enhanced for 2020, and review the existing circuit barrier opening installations.

As part of an ongoing research project it will assess visor opening/locking mechanisms and extend the scope to include requirements to ensure that visor opening systems are operational after being exposed to fire.

The FIA is also planning further research project such as investigating options for proximity warning systems and electronic visibility aids, research into retrofit and upgrade options to improve impact performance of existing guardrail barriers, as well as research into novel barrier systems.