Technical Insight: A complete analysis of the launch-spec Mercedes W12 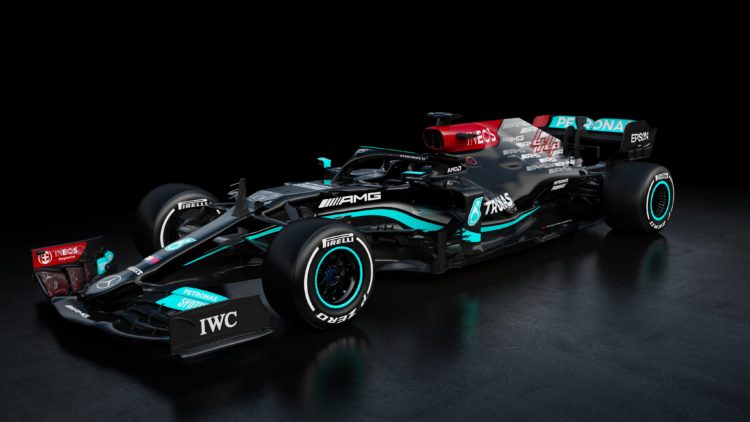 Mercedes has revealed the long-awaited W12, a single-seater that does not seem to differ much from last year’s car, and that’s because the images shown were renders, later followed by a video of the car with various parts covered up.

The 2021 car of Lewis Hamilton and Valtteri Bottas is once again a likely candidate to conquer both championships this year, with the possibility of breaking almost every record in Formula 1.

The Brackley team tried to keep the main technical characteristics well hidden. However, even if we couldn’t appreciate the main innovations and technical curiosities during the actual launch of the car, it is possible to grasp some interesting aspects of the new Anglo-German single-seater.

Analysing the front of the Mercedes W12 there are no major technical differences with the old W11, by virtue of a nose that remains with the same impact structure approved last year.

The support pylons of the front wing are narrow, as we are now used to seeing and has been the case since 2015 for Mercedes-designed cars, while the cape under the nose has been slightly refined compared to the 2020 specification, with an end part that directs the flow towards the bargeboards (arrow 1).

An interesting aspect concerns the front brake sockets (arrow 2), which have a wider section in the lower area. An opposite choice to those of last year, when the brake sockets were wider in the upper area, and slender in the part below the wheel axle. A choice by Mercedes that goes against the current trend.

As for the double-bracket push rod front suspension (arrow 3), the arrangement of the arms is similar to that of 2020, with the steering column on the lower triangle line.

Despite the farewell of the dual axis steering (DAS) system, Mercedes has not changed the front suspension, an area in which it was thought the focus would be on spending their development tokens. James Allison, Mercedes technical director, has refused to say where they spent their two tokens.

The farewell of the DAS suggests an adjustment to the internal elements (torsion bars, springs) in an attempt to search for kinematics suitable for the new rigid structure of the Pirelli 2021 tyres. At the end of 2020, Mercedes tested a W11 without DAS on a number of occasions, whilst also testing thinner torsion bars to obtain data in terms of optimum stiffness.

It will be interesting to further scrutinise this area of the W12 as soon as testing begins in Bahrain and Mercedes reveals the ‘true’ W12.

The main aerodynamic change compared to 2020 concerns the front wing, even if it’s still derived from the W11. Mercedes looks to be seeking greater outwash, with the airflow directed around the outside of the tyres. There is a difference in the Y250 area with increasingly curved flaps compared last year’s specification.

But the most important difference concerns the endplates, which are not only more inclined to increase the outwash effect, but on the W12, Mercedes has adopted the internal drift blow, as seen on the Red Bull RB16 last year.

In the central area of the Mercedes W12 it’s almost impossible to notice any major changes compared to the W11, assuming the chassis has remained the same due to the freezes imposed by the FIA last year.

The radiator vents are slightly narrower than those of the W11, and remain in the pattern introduced last year (and by now all the teams have adopted) with the air intake above the side impact protection structure. The support for the rear-view mirrors is quite different in the rendering shown by Mercedes, which we actually know to have a “stepped” shape, having seen it during Valterri Bottas’ seat fit.

The bargeboards appear almost identical to the last specification introduced at Spa last year on the W11, while the sides have the usual sloping downward shape (where the Petronas branding is), forming a sort of slide to bring more air flow to the floor.

The side image of the Mercedes W12 also shows the absence of air intakes for heat dissipation on the sides of the Halo (such as we saw on the McLaren MCL35) that we will certainly see re-appear in Bahrain.

Every year is comes as a surprise to see just how tight the rear of the Mercedes is, and seemingly gets tighter each year.

The rear of the Mercedes W12 is perhaps the part most noticeably different to the W11. The body wraps around the Power Unit like a sheet of silk, forming humps along the engine cover. In fact, in the image below, the presence of a bulge in the bodywork (probably the intercooler) can be seen, a sign that the engine cover is following the contours of the Power Unit as closely as possible.

The rear bodywork is also very narrow in the lower area, and the engine cover air vents have been raised slightly, wrapping the upper triangle of the rear suspension, to form a narrower channel in the lower part of the floor.

This suggests that perhaps Mercedes has spent its development tokens on introducing a new, slimmer gearbox design…time will tell.

This may also result in different arrangements (again for aerodynamic purposes) of the rear suspension arms and the drive shaft. But to find out we will need more detailed photos that show this beautiful area hidden by the renderings published by Mercedes.

Taking a look instead at purely aerodynamic components such as the floor and rear wing, they do not present particular technical innovations: the floor is quite simple, and does not have aerodynamic elements in the area where it is narrowed diagonally towards the rear wheel, while the wing is supported by the double pylon swan neck pattern.

Mercedes is certainly keeping its cards close to its chest with regards to the floor in particular. It showed it off with large smooth covers, hiding the interesting developments it might have discovered from its rivals until it is forced to uncover them later this month.

Regarding the rear wing, it was shown with the gull-style T-Wing introduced in the middle of last season, with the question of whether Mercedes will alternate the double pylon solution with the single support one depending on the circuit, as it did with the W11.