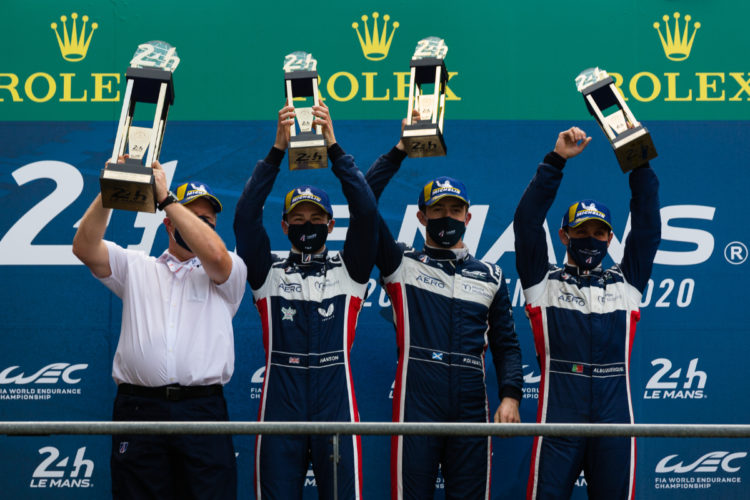 The year 2020 will certainly go into the history books as one of the strangest, unusual and most challenging years that motorsport has ever seen. Two months into the year, and before most series had properly been able to kick off their seasons, the COVID-19 pandemic swept across the planet and temporarily put motorsport lower on the priority list. Races were cancelled worldwide and it would take several months for racing to return again.

Once racing did get underway, however, few drivers had as memorable and successful a run in 2020 as United Autosports’ Phil Hanson. The statistics pretty much speak for themselves.

In the nine races Hanson entered in 2020 across the European Le Mans Series and FIA World Endurance Championship, he won six, finished on the podium twice and only finished outside of the top three once, at last month’s Bahrain WEC finale. Not to mention winning the 24 Hours of Le Mans in LMP2 class alongside Paul di Resta and Filipe Albuquerque, Hanson’s regular partners.

“I now finally have the time to reflect on my success,” says Hanson, now that the unprecedented 2020 season has come to a close. “Of course the aim was to win ELMS, WEC and Le Mans when we set out at the start of the respective seasons but to actually win all three, in the same season, is amazing.”

Hanson took part in two major series with United Autosports and regular team-mate Filipe Albuquerque. While they would capture championship glory in the WEC with Di Resta, Hanson and Albuquerque were paired as a duo together in the compressed European campaign.

“ELMS was a fantastic season. It was shortened, five instead of six rounds, a second Ricard race taking the place of Barcelona, due to COVID, while Silverstone was missing from the calendar. That was a shame as I enjoy both the Spanish and English tracks.”

“Three wins, two thirds and a fastest lap was pretty amazing, our non-victories being the result essentially of punctures. Filipe and I finally won the title by a healthy 39 points from the ‘sister’ #32 United Autosports car.”

United Autosports’ biggest success during the year came in the FIA World Endurance Championship. After a rocky start with a number of mechanical issues, Hanson, Albuquerque and Di Resta pieced together a four-race winning streak that started in December 2019 and carried all the way through to September of this year.

“We also had an incredibly strong run in WEC,” Hanson said about the world title campaign. “We swapped from the Ligier to Oreca chassis for the opening round of the 2019-20 season at Silverstone in September 2019 but an electronics issue caused an early retirement and we struggled with a few issues due to pure bad luck, recording third-places in the next two races in China and Japan. But consecutive wins at Bahrain, COTA, Spa and of course at Le Mans, was pretty incredible.”

Thanks to those four victories, the Anglo-American squad won the title by 38 points from rival outfit JOTA, which picked up a single victory at Shanghai.

While United were the team to beat for practically all of 2020, Hanson explains that the team had to claw back a significant deficit to get there, due to the troubles it had experienced early on in the season.

“We were 26 points adrift of Racing Team Nederland after Fuji and still 21 points down on them after Shanghai in sixth spot,” the 21-year-old said. “Our Bahrain win last December moved us up to second-place in the standings, three points behind the Jackie Chan DC Racing guys, before we took the championship lead at COTA in February.

“Victory at Le Mans secured the Drivers title for Filipe and me, unfortunately Paul lost out due to missing Fuji, while United also wrapped up the Teams Trophy in France. In the end we secured the titles by a strong 38 points.”

United Autosports’ season then arguably hit its peak with the 24 Hours of Le Mans, where it led the race at various stages with its two cars before the #32 ORECA 07-Gibson of Job van Uitert, Alex Brundle and Will Owen suffered an oil leak.

Hanson, who sat down for an interview with MotorsportWeek.com in the buildup to the race, took a class win and was able to seal up the driver’s title with Albuquerque.

It was Hanson’s fourth start in the French endurance classic. He made his debut with British outfit Tockwith Motorsports, becoming the youngest top-ten finisher in Le Mans history at the age of seventeen.

“Winning Le Mans gave me the most satisfaction this year,” he said. “I made my 24 Hour race début there in 2017, finishing ninth in LMP2 with Nigel Moore and Karun Chandhok and have had Filipe and Paul as team-mates for the past three years, finishing fourth last year.

“It’s obviously my biggest race of the season, for the majority of sportscar drivers I’m sure, which brings huge mental, emotion and stress with it being one race with so many variables that can go wrong.”

The LMP2 battle at Le Mans went right down to the wire in a nailbiting conclusion. United Autosports looked to be headed for a certain until two separate incidents in the final hour, including a safety car after a big crash for James Allen, suddenly sparked new life into the fight.

Hanson, driving the #22 ORECA 07-Gibson for the final stint, was suddenly under pressure from JOTA’s Anthony Davidson, with fuel economy a big factor in the fight. After a brief fuel stop, Davidson came within striking distance of the young Briton, but the fight was ultimately decided when Davidson too had to make a fuel stop. As Hanson explains, it was an all-or-nothing situation.

“My final stint at Le Mans was pretty special. I got in the car thinking it was a case of bringing the car home but with Safety Cars and Slow zones, it brought the JOTA car back into play so I had to push to the limit – not knowing they also needed to stop again near the end for a splash.”

“It was an all or nothing two quali-esque laps, taking risks in traffic, thinking the Le Mans win was on the line.”

Racing under COVID (and into the future)

While Hanson has seen major success throughout his 2020 campaign, notably also becoming the youngest driver to win a WEC title, the COVID-19 pandemic has cast something of a shadow over the season, forcing races to be held behind closed doors. As a result, this placed Hanson in the unusual situation of celebrating major successes like the Le Mans win or world title without fans and, more importantly, family in attendance, as he himself admits.

“It’s such a shame there were no spectators at our races. It would have been awesome to look down into the pitlane from the Le Mans podium, for example, seeing all of the fans celebrating our success.”

“That also applies to my father [Dick] not being present. After attending COTA in February and directly due to the COVID epidemic sweeping the world, he stayed at home and didn’t attend another race. Up until then, he’s been ever present at my races throughout my career.”

It’s currently unclear what the future holds for Hanson. Logic dictates he will remain with United Autosports for the 2021 season. However, as he himself explains, his 2020 success has had an impact on his driver rating:

“I’ll be a ‘Gold’ graded driver next year which changes some things so we’ve to look carefully at all of the options with this scenario in mind for 2021.”

With Hanson now upgraded to Gold for 2021, it effectively spells the end for the partnership with Albuquerque and Di Resta. Hanson raced as a Silver-rated driver in 2020. Under the WEC regulations, each team is required to have at least one Bronze or Silver driver, with a free choice over the others.

Albuquerque and Di Resta are both categorized as platinum drivers, meaning that under current rules, the soon-to-be Gold-rated Hanson would not be able to partner with them in the WEC next year.

Even if the partnership between the drivers does not return in 2021, as logic suggests, they can at least look back at a tremendously successful 2020.