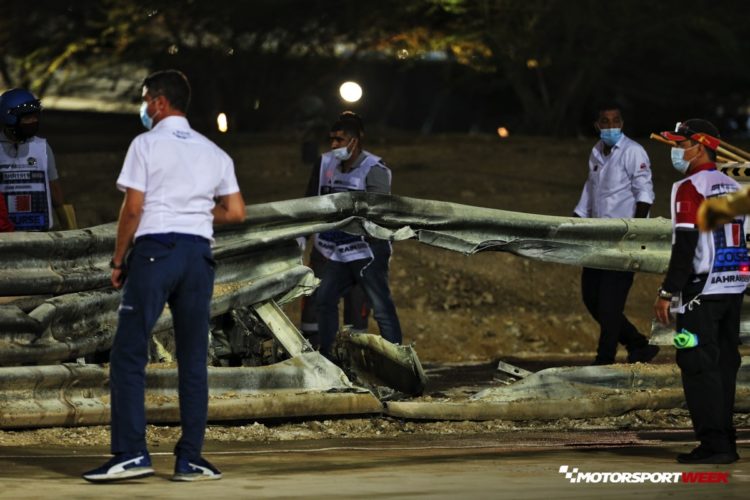 Sebastian Vettel expressed relief at Romain Grosjean escaping a horrific accident at the Bahrain Grand Prix but stressed the trackside barrier should not have “failed” in such fashion.

Grosjean suffered a high-speed accident on the opening lap in Bahrain on the exit of Turn 3 and the impact with the barrier sliced his Haas VF-20 in half.

The survival cell of Grosjean’s car pierced the barriers and erupted into flames upon impact.

Grosjean managed to extricate himself from the wreckage and was transported to by helicopter to a nearby hospital.

Haas confirmed that he has suffered minor burns and is being evaluated for suspected broken ribs.

“I haven’t looked at the images a lot as I didn’t want to, but the main thing is he got out,” said Vettel, who is among the senior figures of the Grand Prix Drivers’ Association, which Grosjean chairs.

“Obviously the guardrail is not supposed to fail like that, I mean it’s good the cars are safer than they used to be in the past but the guardrail shouldn’t fail and the car shouldn’t catch fire in that fashion.

“I don’t know what happened there. I think it’s difficult to say at this stage but the main thing is obviously that he got out.”

Eventual race winner Lewis Hamilton went on to praise the authorities for the advancements in safety.

“It was such a shocking image to see,” said Hamilton. “The thing is, when we arrive, when I get in the car, I know I’m taking risk and I respect the dangers that are in this sport.

“The cockpit… I don’t know what Gs he pulled, but I’m just so grateful the Halo worked, grateful the barrier didn’t slice his head open or something like that, you know? It could have been so much worse.

“It’s a reminder to us and hopefully to the people that are watching that this is a dangerous sport and that it why we’re out there pushing to the limit and playing with that limit, but you also have to respect it.

“But it shows an amazing job Formula 1 has done, the FIA has done, over time to be able to walk away from something like that. It will be investigated and they will do a lot of work to make sure it doesn’t happen again.”