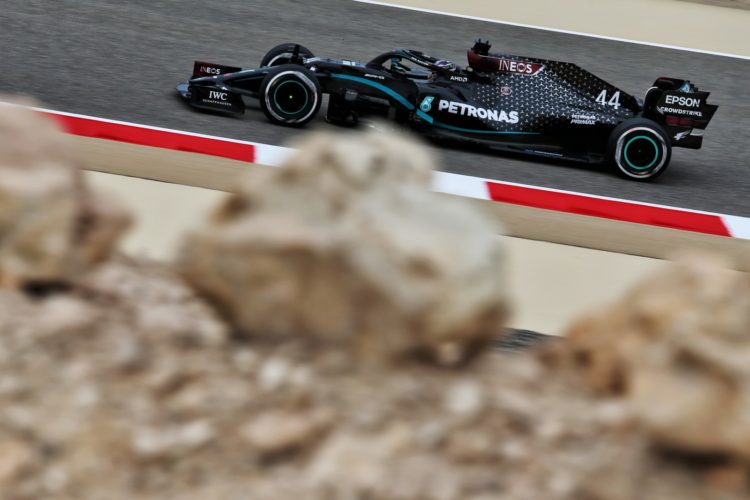 The rearranged 17-round campaign will come to a close over the coming trio of weekends with two rounds in Bahrain followed by the traditional finale in Abu Dhabi.

This weekend’s Bahrain Grand Prix, which was postponed from March, is taking place on the usual grand prix layout at the Bahrain International Circuit, as used for all bar one event in the country since its debut in 2004.

In the opening 90-minute session, held in warm and overcast conditions after a smattering of drizzle earlier in the day, Hamilton clocked a time of 1:29.033s to finish 0.449s clear of Mercedes team-mate Valtteri Bottas.

Both Mercedes drivers used the Medium compound for their quickest lap times and finished comfortably clear of the chasing pack.

Racing Point’s Sergio Perez and McLaren’s Carlos Sainz, 0.967s and 0.985s behind respectively, were the only non-Mercedes drivers to lap within a second of Hamilton.

The opening Bahrain session is often one of the least relevant of the year owing to the atypical scheduling and the picture was complicated further by teams running 2021 tyres for some runs.

Pirelli has brought two sets of its 2021-spec C3 compound, effectively equivalent to the Medium tyre in Bahrain, for each driver to use across the two practice sessions.

It comes after its prototype tyres were trialled in Portugal last month and is the second of three evaluations, with Pirelli to make a 2021-spec C4 available in practice in Abu Dhabi in two weeks’ time.

Renault and Ferrari start behind

In the tight battle for third in the standings between four teams it was Renault and Ferrari which were playing catch-up in the early stages.

Esteban Ocon and Daniel Ricciardo finished towards the bottom of the top 10, split by Lance Stroll, while Charles Leclerc and Sebastian Vettel were 11th and 12th respectively.

Kubica classified 13th, ahead of Haas’ departing duo and Alfa Romeo team-mate Antonio Giovinazzi, while Nissany brought up the rear of the 20-car field, one spot behind Williams regular Nicholas Latifi.

Kimi Raikkonen and George Russell will return to action later on Friday.